Get a New Side Gig; Uber is Going Driverless 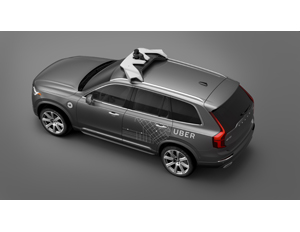 Uber will soon allow customers to order a driverless car from their phones, reports Bloomberg. The autonomous Uber cars will have a pilot launch in downtown Pittsburgh. The cars are modified Volvo XC90 sport utility vehicles. For now, the cars will have human drivers supervising from the driver’s seat. It’s clear, however, that Uber is fervently pursuing a driverless fleet as its new workforce.

The company announced its acquisition of Otto 90, a tech startup that makes self-driving trucks. “Otto plus Uber is a dream team,â€ says Uber CEO Travis Kalanick, via Uber’s blog. Â “More and more, the world of atoms is interacting with bits. In order to provide digital services in the physical world, we must build sophisticated logistics, artificial intelligence, and robotics systems that serve and elevate humanity.â€

Uber also announced its partnership with Volvo. Kalanick cites Volvo’s position as a safety leader in the auto industry as a key factor to the partnership. “By combining Uber’s self-driving technology with Volvo’s state-of-the-art vehicles and safety technology, we’ll get to the future faster than going it alone,â€ says Kalanick.

“We are on the cusp of a new era in automotive technology with enormous potential to save lives, reduce greenhouse gas emissions, and transform mobility for the American people,â€ Department of Transportation Secretary Anthony Foxx said, in an interview with Black Enterprise earlier this year.

Others have brought up the potential issue of creating autonomous vehicle algorithms and ethics. Situations will arise where these vehicles will have to choose between two evils–such as running over pedestrians or sacrificing themselves and their passenger to save the pedestrians. How can such decisions be programmed?