I Have a Gary Vaynerchuk Obsession and You Should, Too! 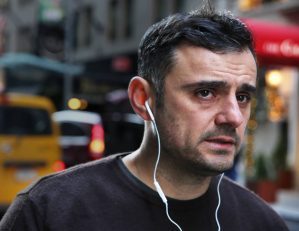 We typically cover African Americans in business but for this, I had to make an exception. As an avid supporter of the African American community, I will grant Gary Vaynerchuk aka Gary Vee, the “black card,” a right of passage, if you will, because I MUST shine some light on this individual.

About two weeks ago, I had no idea who Gary Vee was but, his name kept unexpectedly popping up in the bulk of my conversations. I was doing an Instagram Live for Black Enterprise and a question was asked about marketing. A young woman asked, “Have you checked out Gary Vee?” Having been the first time I heard his name, I really didn’t pay it too much attention.

Next, I was hanging out at a friend’s house. The time was etching up around midnight and suddenly, he was inclined to play Gary Vee’s videos on his 60-inch flat screen. OK.

About 10 hours later, I was on a conference call with Black Enterprise and you guessed it, our Social Media Manager spewed it out again! What was going on?

Lastly, we were doing a Facebook Live for BE The Code and wham, right in the comments section, there it was! It was like his ghost of Christmas present was haunting me.

So I looked him up.

As for his Twitter description, it states, Family 1st! but after that- CEO of @Vaynermedia. Investor in Twitter, Uber, Venmo. Creator of a lot of video content on FB and YT. Hustler and NYJets fan.

So I set… and set… and set. I binge-watched his videos for three days straight. It started with one-minute clips and then it moved on to playlists and then, I found myself watching entire half hour episodes, but, in two to three-hour increments.

Now, I know Gary Vee would frown upon this because he is all about taking action, but my curiosity had quickly turned into an obsession.

So I asked myself, was this healthy? F–k yeah! Because now I’m taking action and sharing him with you!

I’ve learned so much! I found myself on a call yesterday with my boss, legit quoting Gary Vee’s advice. “Everything’s about leverage. Either you go and do it from scratch and build something that gives you leverage or you do something that brings disproportionate value to other people. It’s all leverage.”

I think Gary Vee has so much knowledge to bring to this community, and the world, as a whole. If you aren’t familiar, which you may already be, according to his Klout score, I’d suggest you definitely get on board.

A Third of Blacks in This City Have Zero Net Worth

A Romantic Playlist for the Grown and ‘Saved’