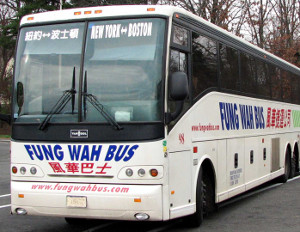 Fung Wah, also called the “Chinatown Bus,” is known for providing cheap, frequent service to cities along the East Coast, like Boston, Philadelphia and New York.

On Tuesday, the US Department of Transportation ordered the entire fleet of motor coaches to “immediately cease passenger serviceâ€ until it can undergo detailed safety inspections.

The immediate suspension of service comes after inspectors found cracks in the frames of many of the company’s aging buses. The request follows a request from Massachusetts officials who found three-quarters of the company’s buses unsafe for use.

Charter buses such as Fung Wah have come under increased scrutiny after a horrific 2011 crash involving a charter bus in the Bronx killed 15 passengers returning to Chinatown from a casino in Connecticut. The National Transportation Safety Board said the accident was probably caused by driver fatigue and ruled that the bus company had provided too little safety oversight.

Fung Wah has a history of troubles, including a $31,000 fine for safety violations linked to a 2006 rollover that injured dozens of passengers.

A woman who answered the phone Tuesday afternoon at a New York number for Fung Wah said she was unaware of the order and buses were still running.