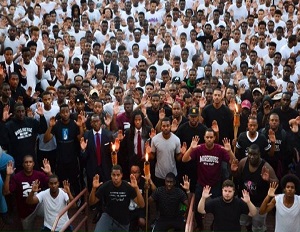 Michael Brown’s untimely and unjustified Aug. 9 death at the hands of Ferguson, Missouri police officer Darren Wilson came just days shy of Brown’s first day of college. With Brown’s case being one of many cases that deal with young black men being slain at the hands of police, four professors from the prestigious all-male HBCU Morehouse College have penned an open letter in Brown’s honor.

Recognizing that Brown could have very well been one of the scholars entering college on Morehouse’s campus, professors David Wall Rice, Ph.D., Samuel T. Livingston, Ph.D., Marc Lamont Hill, Ph.D., and Bryan T. Marks, Ph.D. have expressed their awareness and support for the Brown family on behalf of the Morehouse faculty.

“As we begin a new academic year at Morehouse College, we are in memory of Michael Brown. Michael, a young Black man who could easily have been enrolled in our college classes — who looked like us, who is u— was gunned down in Ferguson, Missouri two weeks before beginning his college career,” the professors wrote. “The instance of violence visited on Michael is not unique in the experiences of Black men and boys, college bound or not.”

Going into details about the historical implications of Michael Brown’s death and Morehouse’s commitment to continuing to uplift and educate the African American male community, the professors state, “The killing in Ferguson signifies a gross historical reality of Black men positioned as but only bodies to be governed, exploited and exterminated within the context of The Great Experiment that is the United States.” The letter adds, “We will live for Michael Brown and for others who were brutally killed before him simply for being Black men. In that living, we commit to scholarship that is practical and activity based.”

To read the rest of the Morehouse professors’ letter to Michael Brown and other young black men head to Ebony.com.