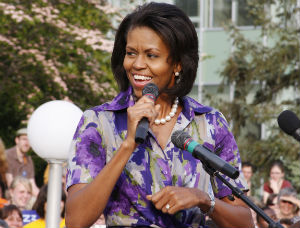 By now, the Melania Trump plagiarism scandal has been thoroughly dissected, with more condemnations and excuses cropping up as the chaos in Cleveland continues.

We certainly don’t blame Melania for looking to the Ivy-league educated Michelle O for “inspiration,” so we decided to help her out by gathering a few of the FLOTUS’ best speeches for the next time Mrs. Trump can’t manage to string some sentences together without stealing from a black woman. Here you go Melania! #WordIsBond

1. On the Realities of Race in America

During her May 2015 Commencement Speech at Tuskegee University, the FLOTUS delivered a painfully honest speech on race.

Acknowledging the harsh realities that come with being black in America, Mrs. Obama assured the graduates that they were in alone in their “nagging worries that you’re going to get stopped or pulled over for absolutely no reason,â€ and “fear that your job application will be overlooked because of the way your name sounds.â€

2. On Overcoming Misogyny and Sexism

In March 2016, while in Buenos Aires, Argentina advocating for women’s rights with her Let Girls Learn initiative, the FLOTUS delivered a highly personal speech to a group of young Argentinian women.

“As I got older, I found that men would whistle at me as I walked down the street, as if my body were their property, as if I were an object to be commented on instead of a full human being with thoughts and feelings of my own,â€ she said. “I began to realize that the hopes I had for myself were in conflict with the messages I was receiving from people around me.”

Speaking on her own experiences with misogyny and objectification as a young woman, Mrs. Obama shared how she was able to overcome these obstacles.

“I decided to listen to my own voice and to rely on the support of the people in my life who believed in my ability to achieve my own dreams.”

3. On the Shared Experiences of Black and Muslim Girls

In June 2015, Michelle journeyed to London to speak at the Mulberry School for Girls, located in a predominantly Muslim, low-income area.

In an emotional speech, the FLOTUS drew comparisons of her experience as young black woman trying to succeed in the U.S., to that of a young Muslim girl trying to make it in U.K.

“And I have a feeling that my experience might feel similar or familiar to some of you.Â  Maybe you look at the leaders in your businesses and laboratories and government and wonder whether there’s a place for someone like you.Â  Maybe you’ve heard about the kinds of tutors and prep courses and other advantages that wealthier students can afford, and you wonder how you ever will compete.Â  Maybe you feel like no one’s paying attention to you, like you’re lost in the shuffle at home or in this huge city, and you wonder whether it’s worth it to even aspire to be something great.Â  And maybe you read the news and hear what folks are saying about your religion, and you wonder if people will ever see beyond your headscarf to who you really are—instead of being blinded by the fears and misperceptions in their own minds.”

4. On the Idiocy of Donald Trump (Melania, Maybe Don’t Plagiarize This One)

In her last commencement speech as FLOTUS, Michelle O spoke to the City College of New York’s graduates about the importance of diversity.

In a not so subtle swipe at anti-immigrant champion, Donald Trump, the FLOTUS explained that “leaders who rule by intimidation–leaders who demonize and dehumanize entire groups of people–often do so because they have nothing else to offer.â€

“Here in America, we don’t give in to our fears,â€ she said. “We don’t build up walls to keep people out because we know that our greatness has always depended on contributions from people who were born elsewhere but sought out this country and made it their home.â€