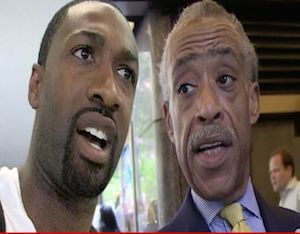 The death of Michael Brown has provoked a lot of thoughts, discussions, and criticism from people from all sides of the moral fence. Most recently, former NBA player Gilbert Arenas used a racial slur on Rev. Al Sharpton over his reaction to Darren Wilson’s shooting of the 18-year-old high school graduate.

The retired Washington Wizard took to his Instagram last week, writing, “The states also show Al ‘Coon’ Sharpton has not helped one situation he has protested at. He actually made it worst [sic] and because of him the jury goes the other way.” Arenas may be taking his cues from a recent Smoking Gun report that pegged the MSNBC contributor as a paid informant for the FBI.

Arenas’ post included a plea to Michael Brown’s family to leave Sharpton out of any planned protests. He said, “Families of the victims please stop asking Al Sharpton to speak on your behalf. You have a better chance having Caesar the Monkey from Planet of the Apes to get justice for you.” As if the racial slur wasn’t enough, the maligned ballplayer added, “Al you’re like a thot in the club looking for attention what you said at Trayvon’s rally. #EnoughIsEnough. You’re right we’re tired of you pretending.”

Sharpton was contacted by TMZ Sports who recently informed him of Arenas’ comments. After being told who the former NBA guard was, Sharpton responded by saying that Arenas’ use of the racial slur says more about him than it does about Al. In addition to that, he also challenged Arenas to compare his basketball accolades toÂ Sharpton’s civil rights work.