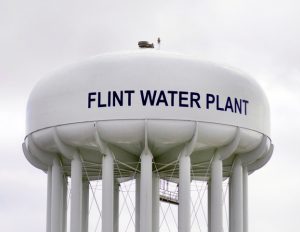 A new report indicates that the water system in Flint, Michigan, no longer contains excess levels of lead that surpass federal limits. However, Flint’s residents, who have been affected by lead poisoning in their drinking water, say the man-made water crisis is nowhere near resolved.

The deadly water fiasco began in 2014 after an official appointed by Republican Gov. Rick Snyder switched the community’s water supply source to the Flint River. As a result, lead-contaminated water was streamed into the homes of thousands of Flint residents for months. The water also corroded Flint’s pipes. Following the public health crisis, a Legionnaires’ disease outbreak linked to the water killed a dozen people.

On Tuesday, state government officials released a letter stating that the elevated level of lead has been contained.

Per The Associated Press:

The 90th percentile of lead concentrations in Flint was 12 parts per billion from July through December, below the “action level” of 15 ppb, according to a letter from the Michigan Department of Environmental Quality to Flint’s mayor. It was 20 ppb in the prior six-month period.

Based on the sample of 368 residential sites, Flint’s lead levels are again comparable to other similarly sized U.S. cities with older infrastructure, state officials said.

“This is good news and the result of many partners on the local, county, state and federal levels working together to restore the water quality in the City of Flint,” said the department’s director, Heidi Grether, in a statement. “The Flint water system is one of the most monitored systems in the country for lead and copper, and that commitment will remain to ensure residents continue to have access to clean water.”

“The remarkable improvement in water quality over the past year is a testament to all levels of government working together and the resilient people of Flint helping us help them through participation in the flushing programs,” it reads.

Despite the “good news,â€ community residents say it’s way too early to celebrate, especially since officials are advising residents to only consume filtered or bottled water until new water pipes are replaced in the city.

Melissa Mays,Â a community advocate with Flint Rising, toldÂ The APÂ that the new report “means nothing. There’s still lead in the system.â€

She went on to argue that, “Numbers always fluctuate and the department only tested one percent of homes in one period of time in Flint. These reports are premature and it gives residents and everyone else a false sense of security that things are getting better when they are not,” she told NBC News.

Other residents, like 49-year-oldÂ disabled veteran Arthur Woodson, say the water is “still not safe.”

Likewise, resident and mother Tonya BloomingÂ questioned the government’s progress. “If it’s been years and I still can’t drink or use the water, then what progress is that?” she asked. “Lead numbers change week to week, and I have a feeling there will be another report later on that will negate this one. It’s happened to me before.”

“Reports like this butter people up so it looks like things are all great, but is really just laying the groundwork to exit without actually doing anything,” added Flint resident Donald Harbin.

On Wednesday, Detroit rapper Big Sean announced on The Daily Show With Trevor NoahÂ that his foundation raised almost $100,000 to help victims in Flint. He also expressed his own personal views on the public health crisis and revealed that his mother was affected by the lead poisoning.

“It’s not even close to being over,” he said. “That situation wasn’t a natural disaster. It’s something that should’ve been prevented and could’ve been prevented, so it’s just disgusting to think about the damages that these families and even kids have to go through with the lead poisoning.”

Selena Hill is the Associate Digital Editor at Black Enterprise and the founder of Let Your Voice Be Heard! Radio. You can hear her and her team talk millennial politics and social issues every Sunday at 11 a.m. ET.

Learn more about the water crisis by listening to her 2016 radio interview with Flint activistÂ Nayyirah Shariff, Coordinator with the Flint Democracy Defense League, below.