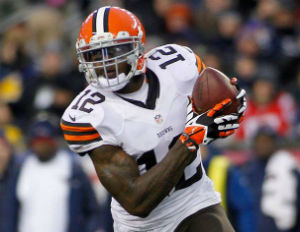 Josh Gordon, picked by the Browns in the 2012 Supplemental Draft has emerged as one of the league's top receivers.

When Josh Gordon became the first NFL player in history to record back-to-back 200-yard receiving games, it didn’t take a mathematician — or an NFL historian, for that matter — to know the names that are not on that list.

It came as little surprise, then, that Gordon and NCLUSIVE Sports agreed to a marketing representation and branding deal. Based in Hollywood, NCLUSIVE “will manage all marketing opportunities as well as the digital assets for the second-year NFL phenomenon.”

The multi-service agency will build Gordon, 22, an interactive website, manage his social media platforms PR, and seek and manage his marketing and endorsement opportunities.

“Gordon’s stock has never been higher after he became the first receiver in league history to have back-to-back 200-yard games,” Sports Illustrated Peter King wrote recently. “He caught 14 passes for 237 yards and a touchdown against the Steelers in Week 12, and 10 balls for 261 yards and two scores against the Jaguars last weekend.

His place in NFL history is not lost on the young receiver.

“You think of all the great receivers that have played the game, and for it not to have been done before–I was pretty taken aback,â€ Gordon told King. “Jerry Rice, Randy Moss, Andre Johnson–the list is pretty long. I was shocked, to say the least. But it’s a great accolade to have, and I’m proud to have done it.â€

“We are incredibly excited to be working with Josh in developing and growing his overall brand and digital presence,â€ said NCLUSIVE’s Justin Giangrande, co-founder and COO. “NCLUSIVE Sports is at the forefront of innovative marketing as well as the digital and online space, and we look forward to focusing our services on one of the league’s most electrifying young talents.”

Gordon has backed up his performance on the field with a commitment to excellence following a two-game suspension at the beginning of the season. He told the Cleveland Plain Dealer he’s going to get it right. “For the simple fact that there’s no chances. There’s not too many chances really left out there, no room for mistakes for me. It’s either get it right or that’s it.”

All that’s followed is an NFL season that’s going to be talked about for a long time.

“What Josh is doing is unprecedented,â€ Giangrande continued. “To think of all of the greats who have played the game and to be the first ever to record back-to-back 200 yard games is truly incredible. Josh has a great opportunity to elevate his brand and personality off the field to his level of play on it. It is only natural that we help him do this through a 360-degree approach to leverage his brand, utilizing both digital and traditional marketing opportunities.â€

How to Kick Your Email Addiction