What the Fiscal Cliff means for Small Businessess 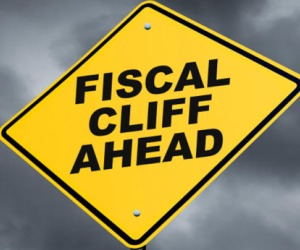 The fiscal cliff refers to the effect of a set of legislation which if unchanged will result in tax increases, spending cuts, and a reduction in the budget deficit at the end of 2012. These laws include tax increases due to the expiration of the Tax Relief Act and theÂ  Unemployment Insurance Reauthorization and Job Creation Act of 2010. Many fear if the deficit is reduced suddenly, there is an increased risk of recession in 2013.

While the term “fiscal slopeâ€ would be more appropriate because while the economic effect would be substantial, it would not be felt immediately, but rather gradually as weeks and months went by. Whatever name is used, small business advocates are appealing to Washington to avoid the $607 billion in tax increases and spending cuts. The fiscal cliff is like a slow motion train wreck that President Obama and Congress must work together to stop.

“There is no reason why all tax relief measures set to expire at year end cannot be extended for another year to allow for a working transition period on tax reform,â€ said Karen Kerrigan, CEO of the Small Business & Entrepreneurship Council.

A similar viewpoint was expressed by the president and CEO of the National Association for the Self-Employed, Kristie Arslan.

“The critical issues facing the country and America’s self employed remain, tax reform being of the utmost importance to ensuring continue economic recoveryâ€ she said.

Senate Majority Leader Harry Reid echoed Obama in calling for a quick solution to the crisis and said “the richest of the richâ€ paying more should be part of the equation. This was part of the president’s campaign-long call for higher taxes on incomes over $200,000 for individuals and $250,000 for couples.

On Tuesday night, House Speaker John Boehner said the fact that the GOP retained control of the House means “there is no mandate for raising tax rates.â€ He also added that “If there’s a mandate, it’s for parties to work together to help our economy grow.â€ Boehner added “we’re closer than we think to the critical mass needed legislatively to get tax reform done.â€

Republicans have mentioned they would consider higher taxes if it included a overhauled tax code that was cleaner with fewer loopholes and lower rates for all, including the richest Americans.

“Now, Back In MY Day!” For New Wealth, Go Old School

Five Steps to Becoming a Supplier for America’s Largest Retailer