Cuban Embassy Opens in the US 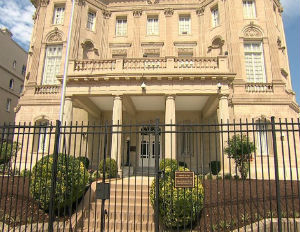 Fifty-four years after the United States cut off diplomatic ties with Cuba, the Cuban embassy reopened in D.C. on Monday. Cuban Foreign MinisterÂ Bruno Rodriguez Parrilla arrived at the Cuban embassy, located in a mansion on 16th street in the U.S. capital,Â to raise his country’s flag.

[Related: The NBA Is Hosting A Camp In Cuba]

“We never had the flagpole in the place where it is now, because it was on the top of the house,â€ Ambassador Jose Cabanas told ABC News. “And it’s the first time ever, we had the flag pole outside, and the meaning is different. … We’re finally recognizing each other as states, as sovereign countries. And for anyone, any citizen in the world, the use of his own flag is very important and meaningful.”

“Our nations are separated by only 90 miles, and there are deep bonds of family and friendship between our people, but there have been very real, profound differences between our governments, and sometimes we allow ourselves to be trapped by a certain way of doing things,â€ President Obama said during a recent press announcement in the Rose Garden at the White House.

Check out some of the photos on the following pages…