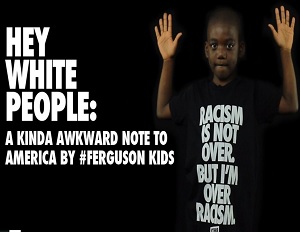 It’s been a month since the death of Ferguson teen Michael Brown, and a few kids from his hometown have gathered together to show that they, along with the rest of the country, have not forgotten about the teen and the racism that exists today.

In a new video from T-shirt companyÂ FKH8, which provides shirts geared toward LGBT equality and fighting racism, six black youngsters from Ferguson gather together in a call to end racism.

Wearing shirts that read “Racism is not over. But I’m over racism,” the young leaders in the video recite excuses that white Americans often give for why they avoid getting involved in issues pertaining to racism.

“Just because Beyonce is on your playlist and you voted for Obama doesn’t mean that our generation has seen the end of racism,” explain the kids in the video, who range in age from 6 to 13.

Check out the must-watch video below to hear the kids speak out against racism in America: