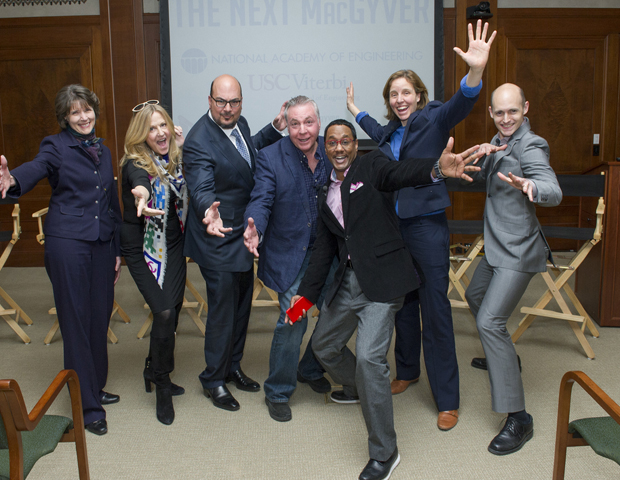 When you ask young people today, ‘What do you want to be when you grow up?’ it’s not uncommon to hear answers like forensic scientist or medical examiner. Academics say the surge in the popularity of these fields is due in no small part to the success of CBS hit TV show “CSI,” which debuted on October 6, 2000.

Today, a group of some of Hollywood’s top producers joined the National Academy of Engineering, The University of Southern California’s Viterbi School of Engineering, and the MacGyver Foundation, to announce a worldwide competition to crowdsource ideas for a scripted TV series.Â  The series will star a female engineer character who contest creators hope the world will embrace as we did Richard Dean in 1985 when he portrayed the scientific secret agent, MacGyver.

The ultimate goal of the competition is to inspire young girls to pursue careers in engineering.

“I literally could not tell you how many times people have come up to me and said…’I went into the sciences because of MacGyver,â€ said MacGyver creator Lee Zlotoff, as he made the rounds to promote the contest.

Here’s how the competition works:

The competition mentors include:

“We could not be more pleased to have some of Hollywood’s top talent donating their time to develop compelling women engineer characters and bringing them to life on the screen,â€ said NAE President C.D. Mote Jr. “This contest provides a rare opportunity to tell a story of engineering and engineers that people practically never see.â€

The White House is also using the competition to bring attention to its own efforts to encourage women to go into the fields of science, technology, engineering, and math. Megan Smith, U.S. chief technology officer at the White House was a speaker at today’s event.

Speaking on the issue last year, President Obama said, “We’ve got half the population that is way underrepresented in those fields and that means that we’ve got a whole bunch of talent … not being encouraged the way they need to.â€

Despite international efforts to attract women to engineering, a study by the American Psychological Association found that 40% of women with engineering degrees either leave the profession or never enter the field.Â  Many respondents said among their biggest challenges:Â  Unfriendly or even hostile work environments.

Karen Horting, executive director and CEO of the Society of Women Engineers, told BE , “If something like this TV show showcases the positive aspects of being a female engineer and improves the image of the field, that’s great.â€

“Girls need to see role models, they need to see this is a desirable career aspiration for women.Â  We love that they’re reaching out,â€ she adds.