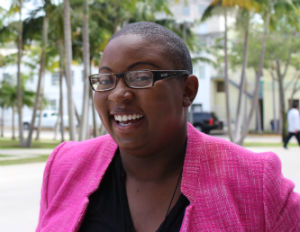 In an effort to get the conversation going about the challenges faced within America’s education system, Black Enterprise has partnered with the Bill and Melinda Gates Foundation to host a panel discussion on Thursday, May 15, 2014 at the Black Enterprise Entrepreneurs Conference in Columbus, Ohio.

Discussing how entrepreneurs can educate our children and profit from it, Black Enterprise has identified a group of leading entrepreneurs to sit on the panel and talk about how businesses and the education community can work together to help close the achievement gap among African American students, what can be done to get more kids interested in STEM and how we can promote the efforts of those seeking post-secondary education pursuits.

Among the speakers at the Black Enterprise-Gates Symposium, is Code Fever Co-Founder Felecia Hatcher. BlackEnterprise.com caught up with Hatcher to find out how Code Fever got started, what she does to help get kids interested in STEM and why entrepreneurs need to be involved in educating the next generation.

BlackEnterprise.com: How did Code Fever get started?

Felicia Hatcher: [Me and my husband] started about a year and a half ago. It’s a community initiative with Feverish Pop and we wanted to bring technology, tech awareness and training to kids in the Miami urban areas. They are predominantly African Americans and other minorities from low income areas. It started as a Saturday event where we teach them how to code and we bring their parents in and teach them about what exactly STEM is because [the term] has been thrown at parents but a lot of them don’t know what exactly it is.

Technology is a field that all kids need to be well-versed in, but it’s usually not an industry many of them are interested in. What do you think can be done to get more kids interested in STEM?

One of the things we do, is have the very honest money conversation with teens and parents. No one actually talks to them about what they can actually make. They can go work for a tech company and be making close to six figures right after college. That gets the parents going and the kids as well and lets them see, “Hey this is a career that I can make good money in and still have fun.â€

We also bring in speakers and let them tell the kids, “Hey, this is what I made working at Apple or some other company.â€ That gets the kids going and excited right off the back.

Why do you think it’s important for entrepreneurs like yourself to get involved in the education market?

If they’re not involved, they’re going to be left behind and in some sort of way it’s going to affect the bottom line of their company. [Their involvement] can help from the basic level of just training the workforce or giving opportunity for some African American to just be in the space. I think it’s a very low-barrier industry to enter from a business standpoint because it’s difficult to get in and create technology and do well financially. But, if we don’t do it, someone else is going to train our workforce. We have to have a greater initiative to get us involved.

To learn more about Felecia Hatcher and her thoughts on the education system, follow @blackenterprise as we live tweet from the Black Enterprise-Gates Symposium on May 15Â and join the conversation using the hashtag #BeSmart.

Universal Buys Another Will Packer Comedy