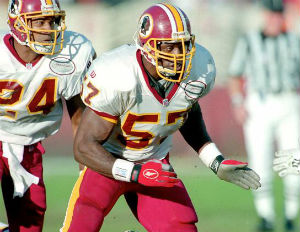 On Wednesday, a federal judge decided against the NFL’s Washington Redskins, ruling that “the team’s name may be disparaging to Native Americans.” The NFL released the results of the ruling via a press release, stating:

“The ruling by Judge Gerald Bruce Lee affirms an earlier finding by an administrative appeal board. Bruce ordered the federal Patent and Trademark Office to cancel the registration. Lee emphasized in his 70-page ruling that the organization is still free to use the name if it wishes — the team would just lose some legal protections that go along with federal registration of a trademark.â€

In response, Washington Redskins team president, Bruce Allen, said in a statement, “I am surprised by the judge’s decision to prevent us from presenting our evidence in an open trial. We look forward to winning on appeal after a fair and impartial review of the case. We are convinced that we will win because the facts and the law are on the side of our franchise that has proudly used the name Redskins for more than 80 years.”

Per ESPN, Ray Halbritter, Oneida Indian Nation Representative and the leader of the Change the Mascot campaign, which works to educate the public on the damaging nature of the “redskin” moniker, issued the following statement:

“If something happening decades ago was reason alone to continue doing it, then America would still have Jim Crow laws and Confederate flags would still be flying on top of state capitol buildings. Bruce Allen’s comments perfectly illustrate why the NFL has a crisis on its hands: at a time when America is demanding an end to outdated symbols of bigotry, one of the league’s teams insists on continuing to promote, market and profit off an offensive and racist symbol. The NFL must take action against an owner and his team, which have clearly lost control of themselves to the point where they are going to court to try to continue slurring people of color.”

Established in 1932, the Washington Redskins are just one of many professional teams that still use controversial names, depictions, and mascots of Native Americans. Other teams include the NFL’s Kansas City Chiefs, MLB’s Atlanta Braves and Cleveland Indians, and the NHL‘s Chicago Blackhawks. Many social justice groups have called for change regarding team names, perhaps none more than the National Congress of American Indians (NCAI), and in 2005 the NCAA began an initiative against similarly hostile and abusive names.

Jeff Lopez, the lawyer representing the Native Americans who challenged the team’s name, said he expects the Redskins to appeal the ruling, but he said that Lee’s ruling was an across-the-board victory for his clients and that he is confident it will be upheld. He said his clients are hopeful that the team will take heed of the decision and change its name.

As part of his 70-page ruling, Judge Lee also said that the legal standard for canceling the registration is whether the name “may disparage” a substantial composite of the Native American community. Though the team has maintained that the name honors Native Americans, Lee said there is ample evidence that the name may be perceived as disparaging. He cited the fact that Native American leaders have been objecting to the name for decades, along with dictionary citations that the word is typically considered offensive.’

Yesterday, the day after Judge Lee made his historic ruling, the team celebrated its 83rd birthday, posting this to Twitter:

On this day in 1932 the Washington #Redskins franchise was born! Happy 83rd to the burgundy & gold! #HTTR #HBD pic.twitter.com/lLNg82UgiR

New Film is a Call to Action to Build Black Wealth