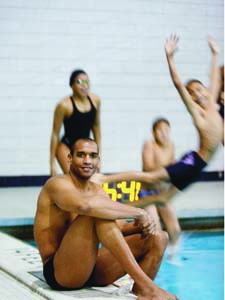 At 3, he jumped into a lake at a family reunion and almost drowned. His father saved him, but his fear of water plagued him even throughout the swimming lessons his parents later insisted he take. “Some of my best friends still pick on me because I cried so hard during my first few lessons,â€ the 35-year-old Muhammad recalls. Had his parents allowed him to succumb to those anxieties, Muhammad would never have become a five-time World Cup Swimming champion and four-time US Open champion–having broken 11 American records. Overcoming the fear of water not only gave Muhammad confidence to swim; it allowed him to realize a talent that would have gone unnoticed.

Today, Muhammad is urging kids–and their parents–to overcome their fears of water and learn how to swim through Born to Swim (http://borntoswimbook.com), a children’s book that chronicles his own experience. He’s hoping his message will reach many of those who would benefit from it. There are roughly 3,000 drowning deaths in the United States each year and according to a 2010 study by USA Swimming, the governing body for the competitive sport of swimming in the U.S., nearly 70% of African American children have little or no swimming ability, with parental fear being the most prevalent reason. But as Muhammad learned, managing a fear such as swimming can provide mental and behavioral tools for how to overcome many other fears in life. “Over the course of a few weeks, you can go from being deathly afraid of being in the water to swimming across a pool,â€ he says. “That’s a dramatic shift in your mental framework.â€

For many people, before they can tackle the task of managing their fears, there is the challenge of recognizing it. “Fear can show up as procrastination, de-motivation, disorganization, a lack of time management, and other forms of avoidance,â€ says Nicole Cutts, Ph.D., a clinical psychologist, success coach, and owner of Cutts Consulting L.L.C. and Vision Quest Retreats in Washington, D.C. Many people don’t even realize fear is what is keeping them from achieving a particular goal, she explains.

Hesitancy in accomplishing projects may be a clear indication of fear. And because fear is internalized, an individual can create elaborate stories in their mind to validate their apprehensions. For example, a person starting a business may fear that failure will lead to homelessness, starvation, and even death. But the only way to overcome fear is to face head-on the challenge it creates, says Margaret L. Rollins, M.S., a wellness and energy coach and owner of Well Part Coaching L.L.C. in Alexandria, Virginia. “You have to acknowledge it and be willing to move through it in order to get to the other side,â€ she says.

Acknowledging your fears helps keep apprehensions in perspective, adds Cutts. “Often, when you look closely at those fears, you find out how irrational they are.â€

Of course, not all fears are unfounded. “Sometimes fear is healthy and adaptive, telling us to stay away from things that we should stay away from,â€ says Cutts. Other times it may be the result of discouraging or hurtful experiences that have taught us valuable lessons about what we should avoid. In those instances, it is valuable to find inspiration in the stories of those who have succeeded despite what may have seemed like overwhelming odds, suggests Rollins.