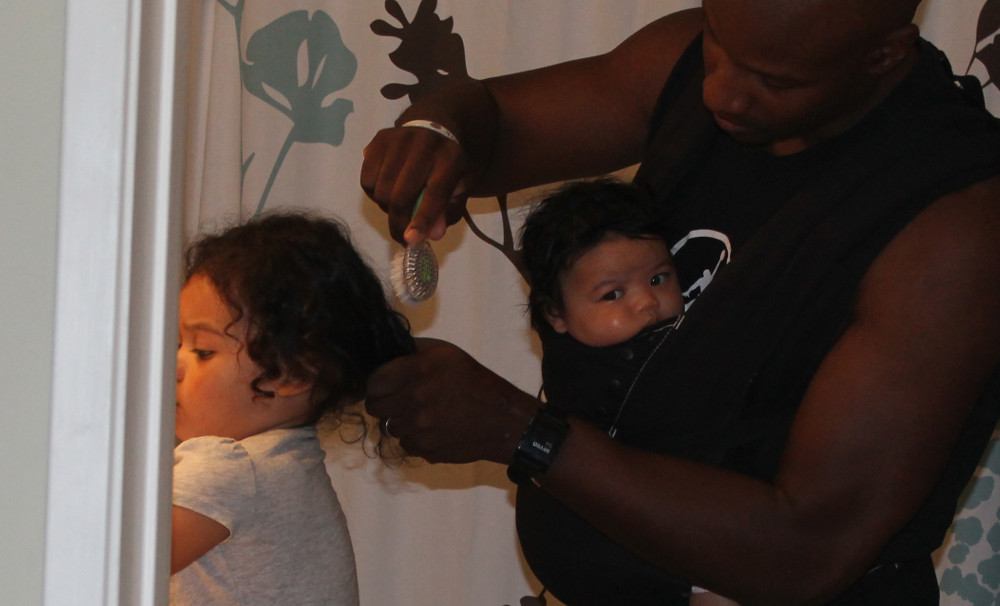 Keynote speaker, fatherhood activist and author Doyin Richards received public attention when a photo of him brushing his oldest daughter’s hair, while holding his younger daughter, went viral. Since then, he has come to prominence as an author and advocate for parents and children. Drawing daily inspiration from his two daughters, Richards’ goal is to use his influence to make the world a safer and happier place for them to live, and in doing so benefit other boys and girls around the world as well.

“Shortly after the photo of Richards caring for his daughters went viral racists spewed hate, skeptics rolled their eyes and thought he “pulled this stunt” to become famous at his kids’ expense, and some women approached him to say that he was the sexiest dad on the planet.

“I wasn’t worried about any of that noise,” Richards tells BE Modern Man. “My main concern was to move the conversation forward about what it means to be a modern father in America, especially a modern black father. I have a powerful platform and my goal is to use it to put a positive dent in the universe.”

Although he realizes there are people in his field with more notoriety and fame, Richards has no interest in following the crowd and being like everyone else. He says, “I refuse to compare myself to them because nobody does what I do the way I do it. That’s not meant to come off as arrogant, it’s simply the truth. Every person on the planet can say that about themselves. The difference is will they embrace their uniqueness, or will they run from it? I choose to embrace mine everyday.”

The ability to embrace his uniqueness helped Richards get through the most challenging moments of his career.

“At first I was begging my friends and family to read my blogs, and it was almost impossible to gain any meaningful momentum,” Richards tells BE Modern Man. “I considered quitting multiple times, but that’s when I asked myself an important question: ‘What happens if I give up?’ I knew I wouldn’t be happy with myself, so I kept going mostly because I believed I had a message that would benefit people. I’m glad I stuck with it because my beliefs came true.”

Today Richards’ message of fatherhood is reaching the masses, and with this exposure he understands how critical it is for the black community to tell our stories in our own way.

“Before social media and blogs came around, we were at the mercy of mainstream media to paint a picture of what we really are, and oftentimes it wasn’t very favorable. Now we have the control and people are listening and learning about the true experiences of men of color.”

Richards is showing that a man raising two kind, empathetic, caring little girls is something more commonplace in the black community than mainstream media depicts.

“I see that people admire me and look up to me, and I take that very seriously,” says Richards. “I will continue to reach as many impressionable young men and women as possible through my speaking events, but I also want to amplify my reach by creating a column in a major newspaper or magazine, or hosting my own radio or television talk show.”

Determined and focused, Richards is ready to take his passion for fatherhood to the next level.

“I’m not smarter or better connected than anyone else. I just hustle and I’m hungry, and I decided that it’s my turn to eat now. Being a BE Modern Man means being confident, being a leader, and actually making a difference instead of talking about it. It’s easy to run our mouths, but the hard work entails running through our communities, families, and workplaces to ensure we’re setting a positive example to make the world a better place for everyone.”