Why Family Values Matter in Business 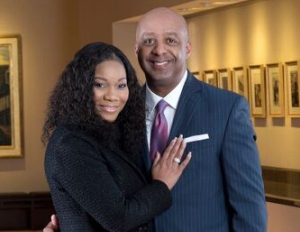 If there’s one thing that is immediately obvious about Marvin R. Ellison, the Chairman and CEO of JCPenney and the 2016 Black Enterprise Corporate Executive of the Year, from the way he talks about his life and the way others talk about him, is that he is all about family values.

The person who best knows his commitment to family values is his wife, Sharyn. The two met in college after striking up a conversation while studying in the library one night. They dated for five years before tying the knot, and this year, they will celebrate 25 years of marriage.

“He loves family. He loves his kids. He’s the one that tucks them in every night–and they are 20 and almost 15,â€ Sharyn jokes. “I think he had a great upbringing from his parents. He was mature. Very well-grounded, very humble. He’s very God-fearing; he truthfully believes in God, faith, family, and then work–in that order.â€

The importance of family values goes both ways for the couple. Ellison says Sharyn believed in him right from the start, even though he was a small-town boy with big dreams. “People in that little, small community, man, they [would] look at me and listen to some of the things that I was saying I would try to accomplish, and they didn’t support it. They thought I had my head in the clouds. She was the first person I ever met that said, ‘Oh, absolutely; you can do this!’ or, ‘We can do this!’â€

He’s also quick to acknowledge not only Sharyn’s support, but her sacrifice. “We moved seven times in the first 12 years of marriage. I’d get another opportunity, and she’d have to quit her job, leave her friends behind, and we’d go to another city,â€ he says. “Every time those opportunities presented themselves, we’d sit down and have a business discussion. It would never be emotional. It was always, ‘Is it going to help us achieve the dreams and aspirations we have as a family?’ If the answer was ‘yes,’ we’d pray about it, and we’d make the move.â€

“Without question, I would not have the level of success in business–or in life–without having such a strong spouse with a lot of wisdom, who prays intensely for me on a daily basis and keeps me lifted up,â€ Ellison says. “Those things matter.â€

This story appeared in the September 2016 issue of Black Enterprise magazine.

Hawaii: When You Need An Escape from the Chill of Work

Multitasking Entrepreneurs, Who’s On Your Team?