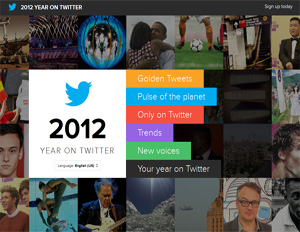 As we inch toward the close of 2012, we can expect a slew of “best of 2012â€ lists. But what if your social media profile provided you with your very own list? Twitter–and now Facebook–is giving users a snapshot of what everyone has been discussing on the social networking platform, and even Google has broken down the most popular subjects into categories and countries (although it doesn’t include a summary a comprehensive summary of the entire world).

Mark Zuckerberg’s network is allowing users to see their personal highlights of the past year, such as new friends and photo additions; according to overall national trends, Facebook notes that the biggest events of the year include the presidential election, the Superbowl, and Whitney Houston’s death. The site lists Instagram as the most talked-about technology topic and “TBHâ€ and “YOLOâ€ as the most popular memes of the year. Users can access their own “Year in Reviewâ€ on Timeline by going to Facebook.com/yearinreview. Twitter unveiled its own “best ofâ€ list in video form (see below), but Portland startup Vizify will provide you with your own, as TechCrunch calls it, “personal infographic.â€ Just visit Vizify.com.

Flip the Script: 3 Key Questions to Ask During Your Job Interview

Up in Smoke: Don’t Let Twitter Ruin Your Career