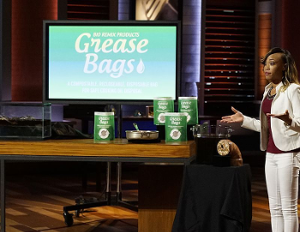 Latangela Newsome created “Grease Bags” after trying–unsuccessfully–to find a safe and easy way to dispose of used cooking grease. On Friday, Jan. 13, the “momtrepreneur” will pitch her business to the sharks on ABC’s Shark Tank.

When she does, she will join an increasing number of black entrepreneurs on the eighth season of the hit show, including PetPlate, Naturally Perfect, Lulu Bang, andÂ Angels and Tomboys. Grease is often listed by plumbers as one of the top causes of clogged drains. However, in addition to clogging drains itself, grease can trap other particles as well, eventually creating an impassable and expensive mess.

Pouring grease down the drain is as hazardous to the environment as it is your bank account. Clogs can lead to sewage backups, pollution of water filtration systems, and personal and commercial pipeline replacements.

As the U.S. economy continues to recover, this simple and eco-friendly product might be well positioned to take advantage of the new business environment.

The New Business Environment of 2017

Earlier in January,Â Jason and Angelica Sweeting pitched their line of Naturally Perfect Dolls to the sharks. They secured a deal with Daymond John; $200k for 30% of the company.

As we enter 2017, the environment for small businesses looks very different than it did even two years ago. In 2016, average hourly wages for American workers increased 2.9%.

The Wall Street Journal reports that wages are now the highest they have been since the Great Recession of 2008/2009.Â  The economy added 156,000 jobs in December 2016, and although access to capital still lags for entrepreneurs of color, it is finally nearing pre-recession levels.

Higher wages and interest rates that are still near historic lows means that entrepreneurs looking to start or grow businesses can do so in a much more friendly environment in 2017. This is good news for PetPlate, Lulu Bang, Grease Bags, and other small businesses. We will have to wait and see if these positive economic indicators lead to business success this year.

Your Health is Your Wealth! Get Fit With These 5 Practices