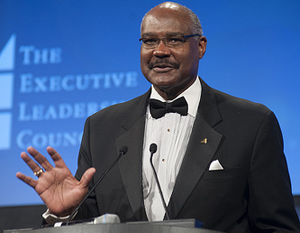 From the very first day Ronald C.Parker stepped foot into his new role as CEO of the Executive Leadership Council in 2012, he made it clear that his plans for the organization were ambitious.

With over 600 current members in ELC, Parker plans to expand the organization’s presence by extending membership beyond those associated with Fortune 500 companies to include entrepreneurs as well as black leaders abroad.

In June of this year, ELC members were invited by Sigma Pi Phi Fraternity to co-host a series of events on leadership development in London to commemorate the Alpha BoulÃ©. Meeting with global business leaders of the African diaspora, Parker said the organization’s visit to London was one of many international visits to come, as they take the discussion of corporate board diversity beyond the walls of America.

The fight to make ELC a globally-recognized organization is one of many goals on the former PepsiCo executive’s list as he grows ELC to not only be an organization that pushes for diversity in C-Suite and executive level positions, but one that also puts forth effort to train the next generation of black professionals for leadership positions.

BlackEnterprise.com: What is the value of taking the discussion of global diversity abroad, and what was the objective of your recent trip to London?
Parker: The trip to London was based on outreach from several black executives who are a part of the Boule. One of the initiatives inside of ELC is to expand our footprint globally. We had just finished meeting in Toronto, Canada, and saw it as a wonderful opportunity to partner with another brand and use it as a chance to connect with other black executives from the African diaspora who are based in London. We had over 150 black executives from global enterprises to join us for several sessions, talking about board diversity as it relates to Europe. They have a 30% coalition effort to place more women on boards in the United Kingdom and it was important for us to partner with the Institute of Directors (IOD), which is a London-based organization that works with companies to assist placing more women on publicly traded boards in the UK. Our goal there was to meet with them to show readiness, capability, and access to another pool of talent; meaning our ELC members, who should be up for board consideration at London companies.

In addition to expanding the organization globally, what is ELC doing to ensure they are also positioning black millennials to move into these leadership positions?
We are in our 21st year with investing in the next generation of leaders with our Mid-Level Managers Symposium, which has leading sponsors by Target and Pepsi Co. For the last 21 years, we have touched over 18,000 young middle management and millennials, and showed them what’s required for them to be successful in the 21st century. We also just released a white paper called Â “21st Century Global Leadershipâ€ in partnership with Price Waterhouse Cooper, and will be talking about that particular document in our upcoming CEO summit. In that