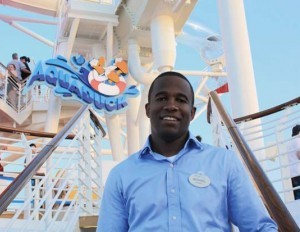 Having begun his career in Detroit as a civil engineer who focused on plans for city infrastructure, Michael Davie now lives and works in Papenburg, Germany, where he oversees projects that stretch the imagination and wow the guests of Disney cruises.

Responsibilities: As an Imagineer (a cross between imagination and engineering), Davie is a project manager for developments associated with the Disney Cruise Line ships. He helps his team take their entertainment concepts from paper to reality in hopes of giving Disney vacationers an exciting cruise experience.

Special projects: Davie was a part of the team that thought up many of the design concepts, such as interactive games, animated wall art, and virtual portholes (to give inside staterooms a live view of the sky and sea), that were introduced throughout The Dream, Disney’s newest cruise ship that launched in January. He also oversaw the development, design, and implementation of Vibe, a trendy indoor/outdoor lounge exclusively for teens; the District, a collection of five sophisticated, adult-only clubs and bars on the ship; and two classic art deco inspired theaters, a 400-seat, state of the art 3-D movie theater and a 1,350-seat theater for live Disney shows at sea.

Skill set: Davie started his career as a civil engineer working for the Detroit Department of Transportation, but is far removed from planning bridges and roads at Disney. As an Imagineer, Davie wears an assortment of hats: designer, budgeter, scheduler, architect, and manager. “Be open-minded,â€ says Davie, who has enjoyed changing industries.

Professional strengths: Davie highly rates his communication skills. He regularly interfaces with a variety of vendors and suppliers from interior designers to architects, as they collaborate to build ships. “Listen and pay attention to others around you,â€ says Davie. “There is no substitute for experience and different perspectives.â€

Most innovative project: Davie was part of the planning team that helped conceive the Disney Dream AquaDuck, the first water slide at sea. The water roller coaster runs in a 270-degree loop around the perimeter of the ship, sending riders 20 feet over the edge of the ship and giving them a panoramic view of the ocean.

Putting his advice into action: Accepting the position of Imagineer for the Disney Cruise Line meant moving his wife and two daughters to Germany, an opportunity he thought would enrich him personally and professionally. “I would recommend an international assignment to anyone,â€ says Davie. “From a business standpoint don’t look at it financially, but look at what it can do for your career. Understand what the financial package is so you understand what you are entitled to, what the expectations are of you, and how it fits into what you want.â€

Looking for the Next Big Thing