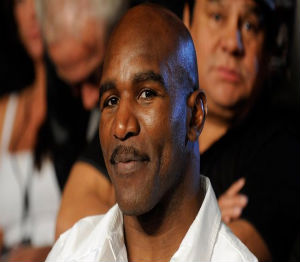 Former heavyweight boxing champion Evander Holyfield turns 50 on Friday and reportedly he’ll be making an announcement at a party in Los Angeles that he is officially hanging up his gloves.

It won’t be the first time. He was forced to retire in 1994, but later returned to defeat Mike Tyson in 1996.Â Â Â Holyfield also won a 1997 rematch against Â Tyson when Iron Mike was disqualified for biting off part of Holyfield’s ear.

Holyfield’s career spanned about 30 years and he garnered four heavyweight titles.Â “The game’s been good to me and I hope I’ve been good to the game,” Holyfield said.