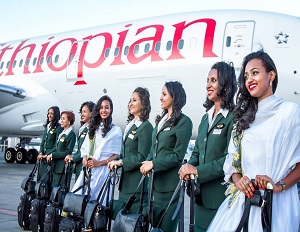 In an effort to showcase its diverse workforce, Ethiopian Airlines announced that on Nov. 19 it will operate an all-women functioned flight on the Addis Ababa-Bangkok route.

The historic flight aligns with the company’s mantra “Women Empowerment for a Sustainable Growth” and aims to inspire other African female students to fill the skill gap and pursue their aviation dreams. The flight, which will take place on the eve of Ethiopian Airlines 70th anniversary, will have women control every function of the flight from airport, to ground, to sky and cabin operations.

“It is a great honor for us to have competent women aviation professionals at Ethiopian [Airlines] in every aspect of the aviation field, which portrays Ethiopian as gender responsive organization that strives to pursue its underlying stance of being an equal opportunity employer, said Group Chief Executive Officer Tewolde GebreMariam in a statement. “We are very proud of their achievements and contributions both as aÂ nationalÂ pride for Ethiopia and a vital treasure for the world at large. It is our sincere belief that this will continue with an enhanced magnitude and passion to sustain Ethiopian on its fast growth trajectory.”

GebreMariam adds that he hopes the airline, which currently has 30% female employees, will be a game-changer in providing equal opportunity and engagement for women to have a leading role in managerial, technical, and operational positions.

“Gender equality will be an important issue in the UN 2030 Agenda for Sustainable Development and we are already on board to push this noble cause.â€

In addition to having an all-female operated flight, Ethiopian Airlines has also launched a nursing room for new mothers with comfortable reclining chairs, refrigerators for breast milk and new electronic breast pumps.