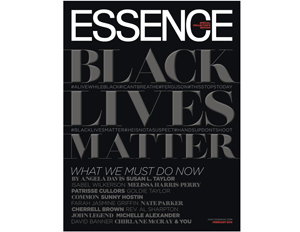 Essence magazine is going a different route for its February ’15 issue and making history in the process. The number one print publication for black women has always adorned its cover with theÂ beautiful faces of our community’s most celebrated figures. For the first time, however, Essence unveils a black faceless cover with the words “BLACK LIVES MATTER” in the forefront.Â According to Essence.com, editors sought “activists, authors, thought leaders and cultural figures to reflect on the meaning of this moment in our society, and what we must do next” for the special issue.

In her editor’s letter, Editor-in-Chief Vanessa DeLuca pens why this historic cover was necessary:

As a mother of two, when I tried to comprehend why so many Black women and men, girls and boys are subjected to racial profiling and victimized by police brutality; when I looked at how those who are put in place to protect us often make us feel fearful; when I considered a judicial process that removes consequences and accountability for those who have murdered unarmed Black people, I thought anything I could say would feel utterly inadequate.

After I spoke with the editorial team–with all our souls aching for answers–we knew immediately what we had to do: Tell the story of this tipping point in our history in America. So this February we are focusing our attention on the daring modern-day civil rights movement we are all bearing witness to and making a bold move of our own: a cover blackout.

She continues to write how words are just as powerful as images, which is why the issue shares the thoughts and feelings of our most prominent leaders. The magazine is also embarking upon a new “Civil Rights Watch” movement, one inspired by the readers. DeLuca writes, “…we will be chronicling–and calling out–significant gains, losses and solutions in this evolving movement as we all try to find a constructive path forward.” The editor ends her letter on a note of optimism: “It gives me hope that so many young people are leading the way, people like Patrisse Cullors, Opal Tometi and Alicia Garza, the brave and beautiful women behind the BlackLivesMatter movement… Let’s repeat this refrain again and again. Until we are heard. Until it sinks in. Until we all believe.”

For their September 2013 issue, Ebony also used their cover to address social injustice. The issue ran four different covers of famous fathers and their sonsÂ in remembrance of Trayvon Martin. Boris Kodjoe, Spike Lee and Dwyane Wade each posed with their sons, all of them wearing grey hoodies. The fourth cover featured a dapper suited Martin family, including the young teen’sÂ parents, Sybrina Fulton and Tracy Martin, and his brother, Jahwaris Fulton.

The first of its kind Essence issue is on newsstands now.