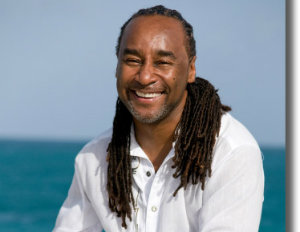 After earning a degree in Computer System Technology from the University of Memphis (formerly Memphis State), Eric Jerome Dickey went on to pursue a career in engineering in Los Angeles, CA. But after years in a stable, ever-growing field, the now New York Times bestseller realized “there was this whole creative part of me that just started to take control.â€ So while working in a field that was paying the bills, the rising creative surrounded himself with theater and comedy, only to find out that a life with words was his true calling.

Deciding to walk away from the lifestyle of a developer, Dickey soon took on the rough existence of a “struggling artist,â€ but his days of borrowing money from friends and working as a substitute teacher to makes ends meet wouldn’t last long. In 1996, EJD published his first novel, Sister, Sister, followed by his second book, Friends & Lovers in 1997. From there, the Tennessee-born author was publishing a book per year, and in 2000 he began to produce two or more novels per year. By 2002, the engineer-turned-writer published 12 books, and now, 10 years later, Dickey has added another 13 novels to his catalogue, not including his new book, Decadence, scheduled to hit stores April 23.

The life of a writer is never easy, but in Dickey’s case, the road to words has led to unprecedented success. The New York Times bestseller broke down his path to success for BlackEnterprise.com, discussing the heart of an artist, how to get by and how to stay financially stable.

BlackEnterprise: Your first book, Sister, Sister was published in 1996, but when did you actually sit down and designate your profession to be writer?

Here you are 14 years later, a New York Times Best-Selling Author, do your writing and engineering side ever merge?

Writing for me [is] still like being an engineer. I’ll joke with friends and say I’m an imagination engineer because I’m engineering a story. When I work with my editor–[and] I’ve had several editors who say the same thing–a lot of people that they work with are addicted to their words, meaning they don’t want to cut anything. And I’m like, Oh, hell no! This is a product, and I’m trying to sell so we need to get all the kinks out and all the errors before it becomes a book. It’s not like a stage play where if it goes up on opening night and stuff’s not working, you call the group together and the next night everything’s changed and no one realizes that the night before it sucked. There are no do-overs. Once you put that product out there, it’s done.

You have to make sure that this is what you want it to be and the way you want the story told. My editor now cut something like 20,000 words. She was like, “Okay, don’t be mad”…but then it’s funny because I went behind her and cut out 40,000 more words, and then I sent it to her again and said, “Is there anything else you can cut?â€ At the end of the day it comes down to is this story “tight?â€

When you start reading a book, hopefully you forget about me. In every good novel the writer disappears. You can no longer see the writer. It becomes about what’s in the book–the characters. You come back for Tyrel, Shelby, DontÃ¨, you’re not coming back to see what Eric wrote. That’s how it has to feel. That’s the equivalent of watching someone act and you can tell they’re acting. So if you’re reading a book and you can tell like it was written…it kind of messes up the journey. Just like reading Stephen King’s Green Mile, you totally forget him. It has his name on it, but it feels magical, like something that just created it’s self.

You’ve said that you have to put a year’s worth of work into three months when you travel to write a story. How much do you write at one time to produce your novels so quickly?

It depends on the flow. I always thought I was writing at a snail’s pace, but it turned out that was not the case. Here is the thing, when you are writing…you don’t know how fast anyone else is writing. To me it always seems like I should write faster, but maybe every runner feels like they should run faster. Some people may say they write a thousand words a day, but I don’t do that. For me, it’s quality over quantity. If I [do] a half-page, and it is tight and perfect then I am content [that day]. I call it “the first 100 pages.â€ When I get to page 100, everything I need for the story is there. There is stuff there I didn’t even realize I wrote.

With 25 novels under your belt, and a new one on the way, are you ever looking to translate your books into film?

I think it would be great for it to happen, but you just don’t see a lot of African-American product turned into film. I often joke that if I was a white woman I would be rich because they come after your product. To me it sounds like this: you have a product that is only going to be sold to the black community, but with the black community it is a Tyler Perry season. So, if you are not under that umbrella, well…I remember actually being in a meeting and saying something about the characters having depth and being serious, and you could see people just not being interested anymore.

Even though you were already working as a software developer/engineer before writing, do you remember what you did with your first check advance?

Yea, I remember what I did with it! I paid back everyone that I owed money. Writing is a labor of love. I had a buddy who floated my rent for a couple of months, I was substitute teaching…car broke down a few times, and this mechanic, Danny–I’ll never forget this guy–was like, “Okay, I fixed your car. Just pay me when you get some money.â€ As soon as I got my money, I was like Santa Claus taking gifts. I don’t care if you’re living like Mitt Romney, if I owe you $5 I owe you $5. I’m not looking at you thinking you don’t need it. I don’t care if I walk in the house and you got $85,000 sitting on the table, that’s your money. And here’s the $5 I owe you to put with it.

Seeing how responsible you were with your first check, what financial advice would you give to young writers trying follow in your footsteps?

Use common sense. A lot of people will try to be ballers, and they’re not, whatever that means. First thing you do, you pay your taxes. You need to look at how much money you really make in the sense that this is your check, this is how much you gotta pay your agent, this is how much you have to pay the IRS. Pay all of those people first, and put some away because it’s gonna rain. You may have good book sales this year, next year is another year. Everybody who’s been big…what go ’em was the IRS. The thing about not paying the IRS, they can come and take everything that you have, period. These are cautionary tales. If you’re making $3 and you gotta pay a $1 in taxes, pay that dollar first. Don’t get a check for $3 and go out and spend $3. That’s the financial advice I would give anyone starting off.

Fat Joe ‘Holding Back’ His Love … of Paying Taxes