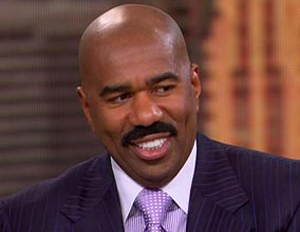 Black Enterprise Entrepreneurs Summit speaker Steve Harvey has a career that spans over 20 years. The King of Comedy has delved into just about every facet of entertainment, including TV, film, production, publishing and even fashion design—with his clothing and accessories label, The Steve Harvey Collection. Here are six of the Harvey’s biggest moments as an entrepreneur in entertainment.

1.Â Steve Harvey performed stand-up comedy for the first time in 1985. Shortly after in 1989, he made it to the finals of the Second Annual Johnnie Walker National Comedy Search.

3. Steve Harvey made history in 2013 when he was nominated for Outstanding Talk Show Host and Outstanding Game Show Host at the Daytime Emmy Awards. This made him the first double host nominee.

4. Harvey and his wife Marjorie founded The Steve and Marjorie Harvey Foundation in which they have several mentoring programs to uplift and educate youth. The couple partnered with Walt Disney World to establish Disney’s Dreamers Academy, an annual mentoring program inspiring and exposing teens to job skills and career opportunities.

6. For his 58th birthday,Â Cleveland Mayor Frank Jackson declared a portion of E. 112th Street where Steve Harvey grew up as “Steve Harvey Way. The comedian Tweeted, “Proud beyond belief. This is the street I grew up on. #E112thStreet #ThankYouCleveland #HappyBirthdaySteve.”

Women of Power: 4 Boss Moves to Get Salary You Deserve