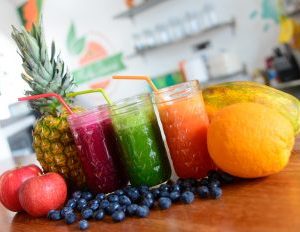 Ruby Jean’s Juicery is helping change attitudes about health, and it started with entrepreneur Chris Goode realizing his purpose. In Part 1, Goode shares how he discovered the health effects of juicing and his realization that his passion forÂ juicing would drive a renewed purpose.

In Part 2, GoodeÂ shares a bit about his journey as a new entrepreneur of a growing business. Â Recently named one of the Top 100 businesses on Yelp.com, Ruby Jean’s Juicery opened just under a year and a half ago and Goode’s team is preparing to expand offerings.

I’ve had this entrepreneurial spirit in me for some time. I keep a business journal and write down every idea. So first thing, I wrote everything down.

I still workedÂ my day job as a catastrophe adjuster. I was blessed to get a higher income-earning job, butÂ I knew I wasn’t the type of person that would retire with the company. When I really settled into the fact that I was passionate about the juicery, I saved like crazy. It was everything I thought about. I stripped down my expensesÂ and put saving at the top of my priorities.

I traveled for my job, so I sold my car andÂ drove my company car, which was a minivan. If I went out on the road, I cooked everywhere I went so I was able to save my per diem money. For the next couple of years, I saved pretty much everything I earned for the most part.

Everything that I’ve done is self-funded. I received one small loan from a family friend who has since been paid back. Now that we’re expanding, the business is feeding itself as money comes in. And I put that money right back into the business–I purchased equipment, a business vehicle, etc.

We’ve got tons of accolades here locally. We’ve been named best juice bar by different platforms in Kansas City. Most of those came inside of our first year. So that is very, very promising.

Getting out the WordÂ

I love Kansas City. I really really believe in this city.

I’ve hosted several different events on different levels, many of them philanthropic; so I’ve had the support of the city for years. Once I really landed on my purpose and decided to open Ruby Jean’s, I leveraged my soft network byÂ word of mouth. Given that this business comes from a genuine place and centered around my grandmother and her story, people have really gravitated toward it.

OurÂ soft network, the organic press locally and our social media and grassroots efforts have really rounded out our marketing strategy. Our presence on social media is pretty good, certainly inside of two years.

We have the audience’s attention here in Kansas City; people are excited about juicing and cleansing but there’s more. From a food perspective, there’s more that we can offer.

We’re expanding into a grab-and-go line without the pre-packaged meals to pick up at our locations along with a juice or smoothie. We’re also expanding our add-ins, fromÂ maca root andÂ ginseng to bee pollen. We’re rounding out our holistic experience so it’s more encompassing.

We are also opening more locations. By next summer, we will have five locations.

How to Stand Out From the Competition