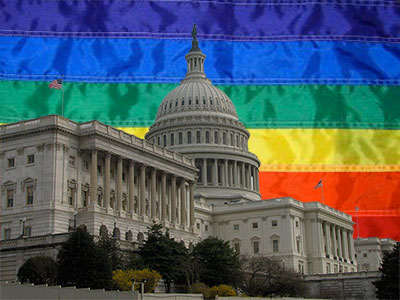 After nearly 20 years, the Senate voted to approve the Employment Non-Discrimination Act, or ENDA, with strong bipartisan support. The landmark legislation bans employers from firing, refusing to hire or discriminating against workers or job applicants based on their sexual orientation or gender identity.

The final vote was 64-32, with 10 Republicans joining Democrats. It’s the first time in history that the Senate has passed ENDA. The House passed a version of ENDA in 2007, but it did not include protections for transgender individuals. The late Sen. Ted Kennedy (D-Mass.) first introduced ENDA in the Senate in 1994.

An amendment to ENDA from Senators Kelly Ayotte (R-NH) and Rob Portman (R-OH), would prevent those religious institutions accepting government funds from being disciplined by federal, state, or local governments for opting out of ENDA.

“ENDA will bring clarity and uniformity that will benefit employers who just want to know and follow the rules. And with a federal law in place, employees will be less likely to suffer discrimination in the first place,” says Kevin Cathcart, Executive Director, Lambda Legal.

As many as 17% of gay, lesbian, and bisexual workers have reported being passed over for a job or fired because of their sexual orientation, and 26% of transgender people report having been fired from their job because of their gender identity.

There are roughly 8.2 million gay and lesbian employees nationwide, according to estimates released by the Williams Institute at UCLA. About one-third of the LGBT community is people of color. In a 2012 Gallup poll, 1 in 3 LGBT respondents (33%) identified themselves as people of color, compared to 27% of non-LGBT respondents.

When compounded with race, gender, sexual orientation, and gender identity, black LGBT people are particularly vulnerable to a lack of workplace protections and face double, often triple, bias and discrimination in the workplace.

“Most black LGBT people live in the South, in the states that are least likely to have LGBT non-discrimination laws on the books,” said Aisha C. Moodie-Mills, senior fellow and director of the FIRE Initiative at the Center for American Progress, in Washington, DC. “As a result LGBT workers in Georgia can be fired from their jobs simply because they are gay or transgender, without recourse. We need ENDA now to protect all workers. States shouldn’t be allowed to discriminate against any minority group; it’s as simple as that.”

ENDA will eliminate or reduce bias against LGBT workers of color. Moodie-Mills points out hiring bias and on-the-job discrimination: Barriers such as unwarranted background checks, inadequate or non-existent non-discrimination protection for LGBT workers, and the lack of mentorships and on-the-job support make it difficult for many LGBT workers of color to find good and steady jobs that provide them with the economic security they need to support themselves and their families.

The passage of ENDA into law would provide potential remedies for violating the law and would be on par with other cases of employment discrimination, reports CAP. Meaning, an employee would get the job or promotion they were denied, get awarded back pay and litigation costs and/or get related compensatory or punitive damages.

On the other side of Congress, however, it is reported that ENDA is unlikely to come up for a House vote due to Republican opposition. In a statement immediately following the vote, President Obama called on the House to pass the bill.

“One party in one house of Congress should not stand in the way of millions of Americans who want to go to work each day and simply be judged by the job they do,” he stated. “Now is the time to end this kind of discrimination in the workplace, not enable it. I urge the House Republican leadership to bring this bill to the floor for a vote and send it to my desk so I can sign it into law.”