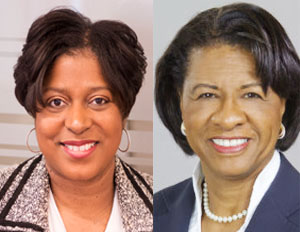 President Barack Obama‘s recently announced initiative to make community college free has the nation buzzing with anticipation. But making sure young people have the tools needed for higher education and the professional world are the goals of Jhan Doughty Berry, Ph.D., and Muriel Howard, Ph.D. Set to attend Black Enterprise’s Women of Power Summit to speak on the panel, “BE Smart: 21st Century Learning: Engaging Minds Through Innovative Learning,” Berry plans to communicate her teaching perspective as a mother and executive director of talent development and diversity for Educational Testing Service (ETS).

“Since this is a learning panel, I think it’s important for us as professional women to really say [that] learning starts with you and in the home. And by the time your child gets to an ETS test, you won’t even be concerned because you would have done all of the 4 Cs and work with your child before then,â€ says Berry. “We do all types of things from a corporate perspective to make sure it’s a fair test. But my focus is we need to address what happens before the testing gets there—before it comes in front of your child. What are those things you can do to really help your child be as prepared as he or she can be?”

A key point of the panel, hosted by the Bill and Melinda Gates Foundation, focuses on the importance of integrating the 4 C’s to a child’s curriculum: creativity, communication, collaboration, and critical thinking. “I think what we’re talking about is making sure that families have what’s going to be required for 21st century learning and 21st century employment,” says Howard, president of the American Association of State Colleges and Universities (AASCU). “What we’re hearing from young college students, [is that] they understand that they’ve got to be able to work well with others and know what a team is, how to function within a team and how to lead.”

“In terms of African Americans, the 4 C’s are incredibly critical. We recently did a series specifically focusing on the achievement gap and the African American male, and what skills and success factors African American males need in order to be successful in elementary, middle, high school, and college,” says Berry, whose organization, ETS, researches and assesses learning. “Being a parent—I have two little ones, 5 and 8, boy and girl—these are issues I deal with every day. What we’ve seen [at ETS], from a research perspective, is the critical thing to do is read with your children, but also to really work now with your children helping to cultivate the 4 C’s at age-appropriate levels. For example, the critical thinking piece, asking your child open-ended questions like, ‘How would you approach that?'”

For Howard, education begins before the children enter the school system. “Now it’s what you know before pre-K. It’s going back to the cradle,” she says. “What’s going on with that child as soon as they’re born? What are we saying to them? We used to have this bad habit of telling kids to shut up instead of telling them to talk.”

Outside of providing education tips at the Women of Power Summit, Berry’s goal is to express diversity and be what she sees as the rarely represented face of high level professional women who also happen to be mothers. “Because there are not, from my vantage point, a lot of African-American women of a certain age bracket who are parents, who have a partner, who have a certain level of educational experience and are at an executive level. I’m one of the very few at my company who is at the level I’m at,â€ she says. “I just want to put that out there and say I know there are other women at the conference who have similar backgrounds, and I just want them to see somebody else doing it. I want them to know that you can be a senior-level executive at a company and not worry that you have a ton of laundry you have to fold.â€

The ‘Big Game’: Fan Stats That Raise An Eyebrow

Consumer Tip: Learn to Live on One Income