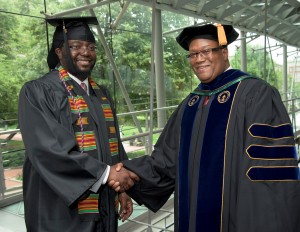 If you’ve ever wondered about the power of journalism, a response to a grim statistic included in an article in The New York Times helped to start a movement that is still in effect–and still needed–today:

Dropped like a bomb in a 2006 article that was part of a series examining the status of African American men, that sentence–and many others that were similarly agonizing to read and comprehend–served to stir a group of concerned black male academics into action.

BMI and similar programs were developed to spur the retention and graduation of black male students, who have a college graduation rate of 36%, considered a “crisisâ€ by some experts in the field.

But such programs are having an impact. David Fullard, Ph.D., visiting assistant professor at Empire State, says that in 2009 when BMI was introduced, the retention rate jumped by 14.25% from the previous year to 71.15%. “These numbers remain on average 5% higher than pre-BMI and 5%—10% higher than other ESC centers without BMI.â€

Enrollment is also up, Fullard says–by 10 to 20 students per year over the years before BMI was put in place. BMI provides:

By utilizing counselors that know how to negotiate the school’s support structures–including applying for financial aid, scholarships, and internships; and connecting with professors and departments that provide tutoring or other services–BMI provides practical assistance without which vulnerable students can get derailed.

Says Craig Pride, an ESC graduate with a bachelor’s of science, “BMI has been one of the biggest and most motivating forces in my life.â€

When Pride experienced a health crisis, he found support in BMI. “Black male professors came by and supported not only me, but my family. They helped to bring me to and from BMI meetings when I found it difficult to walk. Without them and the club I wouldn’t have the confidence I have today with a degree in hand.â€

For more about BMI at SUNY, go to its website.

4 Ways to Protect Your Nest Egg in Retirement