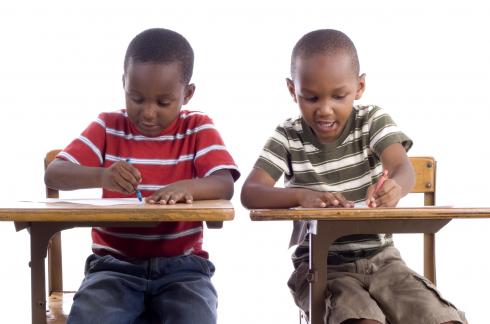 After a stay in daycare left their son hospitalized, Dominique Louis and his wife, Danyiel, began searching for safer childcare options. Married four years, these entrepreneurs have taken concern for their sons Denzel, 4, and Davin, 19 months, and turned it into a business. The Louis family is hoping to offer a healthy alternative to other parents and children as owners of the Green Children’s House, an eco-friendly daycare center in Pompano Beach, Florida.

When the couple’s oldest son was 15 months old, he spent more than 3 weeks in the ICU after developing a staph infection, Dominique says. After the child’s hospital stay and his enrollment in several childcare facilities over the years, the couple decided to look into starting their own eco-friendly daycare center after the birth of their second son. “There are at least five daycare centers within a two-mile radius of us, but we set ourselves apart because we are the only green center,â€ Danyiel says.

All food is purchased through Whole Foods Market to provide only organic and natural food and snacks for students. “Organic food was important to us because of the increasing amount of overweight and sick children that are in this country, and we want to be sure that we are giving our students the best options available,â€ Dominique says. According to the U.S. Department of Health and Human Services, overweight children have a 70% chance of becoming overweight or obese adults.

The facility also houses an eco-friendly playground with artificial turf that is coated with antibacterial protection. What’s more, the center runs as a paperless office, sending all correspondence and billing electronically. “We also use all-natural cleaning products and soaps, provide access to an organic garden for students, and use recycled paper when we have to distribute paperwork,â€ Dominique says. Portions of the student curriculum include eco-friendly awareness, with nature walks and recycling lessons.

“We got a really great deal, and we were able to purchase a pre-existing center for $50, 000,â€ Dominique says. The previous owner was looking to retire and wanted to quickly sell the already functioning daycare, he says. Startup costs for the venture totaled $106,700, including $20,000 worth of building improvements such as a new fence, security system, office equipment, and video cameras. Opening its doors in January, Dominique projects daycare revenues of $145,520 in 2008 based upon an enrollment of 50 students. Open to children ages 18 months and older, the center currently serves 17 students, and the pair has initiated an aggressive marketing campaign to boost enrollment, including flyers, advertisements, and open houses with raffles and storytellers.

Though both are IBM employees, Danyiel has taken a leave of absence from her position as a software engineer to oversee the growth of the center. For Danyiel, the reason to live green is obvious. “This is the approach we are taking to raise our kids,â€ she says. “I want be sure my children are given the best shot at being