Dwyane Wade Sells Sitcom Based on Single Fatherhood to Fox 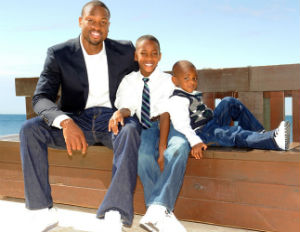 Dwyane Wade has recently sold a show based on his life to Fox.

The show will follow “Daryl Wade,” a hooper raising two sons on his own. Wade’s sons names are Zaire and Zion. The show will be called Three the Hard Way.

“I think they’ll be able to pull the comedy out of the dark moments,” Wade said. “That was one thing I kept saying before I sold my story. I want to be able to bring some light into the dark times. I always take off from “The Cosby Show” kind of thing. They always told a lesson at the end of the day. There’s always a story, and comedy in it as well.”

Wade may not know who will play him in the show, but he knows what he wants.

“Who’s going to play me? I haven’t figured that out yet, but I’m sure it’s going to be somebody handsome,” Wade said. “I just want somebody who’s good. I will be involved, very involved — to the point where it has enough of what I would like to see from my story. Obviously it’s a comedy, but there will be some things you want to let loose.”