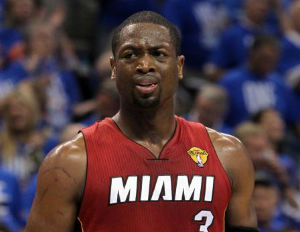 Miami Heat star, Dwyane Wade, is being taken to court after his ex-wife, Siohvaughn Wade, filed documents saying, “she has never obtained any asthma inhalers or asthma nebulizer machines for the children since [Dwyane] was awarded children in his custody on March 11, 2011.”

According to TMZ, the former Mrs. Wade says the no-longer-together couple’s children suffer from extreme Asthma, and need constant supervision and medication for their needs–two things she says D Wade is not providing.

“[Dwyane] recklessly failed to provide the five and ten-year-old children with any medication for a life-threatening illness,â€ Siohvaughn states in the filed court documents.

Wade’s angry ex-wife is demanding the court to require the NBA player to provide medical treatment for their children regarding their Asthma, and has also asked for mandated updates of her kids’ health. And if that isn’t enough, Siohvaughn is also claiming Dwyane is skimming time off her visitation, as Wade has full custody of their children.