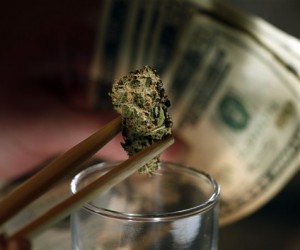 With the recent passage of laws partially legalizing marijuana in Washington and Colorado, weed dealers find themselves faced with a problem familiar to almost all small business owners. How do you as a little guy compete with a larger competitor?

In the same way your local drugstore’s sales would be affected by the opening of a Wal-Mart in your town, street level drug dealers fear “Big Marijuana.â€

Of course by federal law marijuana remains illegal, but to an industry which counts on customers relying on the black-market to procure their products, legal marijuana is a scary proposition. In a recent thread on the popular social media site Reddit, pot dealers anonymously expressed their concerns. One wrote “[someone] with a bunch of seed money might open a 7-11 weed store and shut me down.â€ Another stated, “I never will be able to compete though, and I have no idea how to run a legal business. Corporate pot is coming, and it scares me. It should scare all of us.â€

The concerns of these small (albeit illegal) businessmen and women are a legitimate fear. Companies such as Medical Marijuana, whose mission is to become the industry’s “premier cannabis and hemp industry innovators,” have the size and resources to easily crush small time dealers.

Other dealers see this as a chance to use their “small business statusâ€ as a selling point. One Reddit user wrote he’d combat “Big Cannabisâ€ by distinguishing his services.

“People still want to know where the [marijuana] is coming from, delivery options, 24 hours of operation, anonymity and most importantly IOU’s which big businesses won’t cater to, I do.â€

New Government Website Offers Assistance on the Road to Self-Employment

9 Holiday Gifts That Can Help Boost Your Career