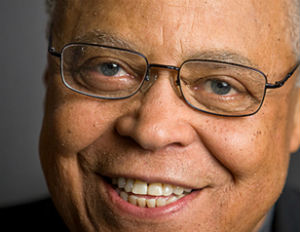 James Earl Jones is known around the world by people of all ages and walks of life, from Star Wars fans who know him as the voice of Darth Vader to children who know him as Mufasa from Disney’s The Lion King. He is renowned for an illustrious career in theater, film, and television. The Drama League will honor the legendary Emmy, Grammy, Oscar, and Tony Award winner at its 31st Annual Musical Celebration of Broadway to be held February 2015.

The black-tie gala will feature dozens of stars from Hollywood and Broadway in a one-night-only musical tribute. The Musical Celebration of BroadwayÂ Honoring James Earl Jones is inspired by Jones’s career in theater, film, and television, including You Can’t Take it With You, Fences, Master Harold…and the Boys, The Great White Hope, Othello, Driving Miss Daisy, Field Of Dreams, Gabriel’s Fire, The Lion King, and the Star Wars trilogy, among others.

“As he is proving eight times a week at the Longacre Theatre in You Can’t Take It With You (in which he currently stars) James Earl Jones is a national treasure,â€ said Executive Director Gabriel Shanks in a statement. “The Drama League is honored to celebrate his extraordinary life and career with him on Feb. 2, and to bring together his many co-stars, friends, admirers, and collaborators from the last six decades, all in one very spectacular night.â€

Jones joins a noted roster of past Drama League Honorees, including Neal Patrick Harris, Liza Minnelli, and Chita Rivera. The Musical Celebration of Broadway Honoring James Earl Jones will raise funds to support the educational training programs of The Drama League Directors Project. Alumni of the award-winning initiative which was started in 1982 now number more than 300.

The late great Broadway producer Joseph Papp gave Jones one of his first major breakthroughs by casting him in Shakespeare’s Henry V. It began Jones’s long affiliation with the New York Shakespeare Festival, eventually counting the title roles of Othello, Macbeth, and King Lear among his many distinguished performances for the company.