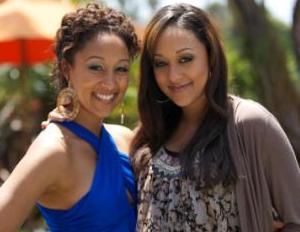 It can be difficult creating your own identity in Hollywood—especially when you’ve been known for so long as part of an explosive combination, T&T (that’s code for the bombastic wonder twins Tia & Tamera Mowry). But somehow, after 20 years in the showbiz and allowing America to watch them go from pubescent adolescents actresses on the 1994 sitcom Sister, Sister to 2010 with Lifetime’s Double Wedding (to Tia’s role on The Game), the Mowry sisters, 32, have managed to create their own paths together yet maintain their individuality.

Now, the siblings have ventured into reality TV territory with their self-titled Style Network show Tia & Tamera (airing tonight at 9pm EST). Although only three episodes have aired sans the drama of cat fights, drink-tossing, messy public divorces and scandalous infidelities, the Tia and Tamera show, debuted with the highest-ratings in the history of the Style Network’s programming.

BlackEnterprise.com did double duty and caught up with the dynamic duo to discuss marriage and parenting, why they’ll never strip for success, and how they’ve always handled their business.

BlackEnterprise.com: Congrats to you both on motherhood and marriage. How does it feel taking on these new roles?

Tia Mowry: Thank you, I’m on cloud 9! Cree is my joy. My husband [Corey Hardrict] has been unbelievable with the baby. He’s such a good father. I often have to ask, “Um, can I hold my baby?” (Laughs) Corey and I are a team in every sense of the word 50/50. I’m so impressed with him and not just because he’s my husband. He buys some cute clothes for baby Cree, whose name means warrior traveler. I think when a parent gives their child a name that has a meaning it comes into fruition because Cree loves to be outside, observing the world and what it has to offer. The minute we take him indoors he cries. (Laughs)

Tamera Mowry: My nephew is the cutest. It’s funny to see my husband, Adam [Housely], around him. And I love being a wife. I’ve only been married for three months and things are great. As Christians, Adam and I chose not to live together because we wanted to do things right. I know it’s so ol’ school but that’s who we are. Also, I wanted us to feel like husband and wife and have that element of excitement. I would imagine it’s the same kind of excitement you feel the first time you make love or the first time you’re living together with someone. It is an adjustment but now pretty much it feels the same.

BlackEnterprise.com: That’s awesome, Tamera, especially because you two reunited after a breakup.

Tamera: Yes we did, but for the record, Adam and I were never engaged before. We met through a professor of mine from Pepperdime who had our photos up and Adam asked who I was and my professor made the introduction. We dated for nearly five years, broke up for a year, got back together for about eight months, got engaged and then married. I knew from our first date that I was going to marry him. He says he didn’t, but I did. I just knew because before Adam I was single by choice for four years because I was so focused on my career and didn’t want any distractions.

BlackEnterprise.com: So how are you ladies loving reality television?

Tia: Honestly, doing a reality show is very difficult because they are following you around through your downtime. You come home to relax, spend time with your husband, and watch TV; but it’s still work and there’s a camera and crew, so you’re never not working. It’s 24/7, so I understand now why people like The Kardashians and Snookie get paid so much because shooting a reality show takes a lot of your time. I love seeing myself on television from this standpoint though, and I thought: I’m crazy! (Laughs). My sister would always tell me, “You’re so addicting—a ball of energy!â€ I’m always laughing. And I even see a side of me that I need to work on because I can be a lil’ aggressive. So it’s good to see yourself as others have or might.

Tamera: It’s a lot harder than people think. They don’t understand that being an actress, you have your scripted lines and then you’re done. With reality TV, they are there 14 hours of the day shooting your every move. It can be invasive and downright annoying. You get to see us emotional or stressed, and then when you add the reality element [of filming with a camera crew] on top of it, it adds another layer of stress. The coolest thing is that we have each other; but it’s a huge adjustment just being you. You can’t help but watch and think, Why did I say that or why did I do that? I realize I’m so emotional. I’m thinking, Dang Tamera you don’t have to cry about everything! (Laughs). I knew I was emotional, but I didn’t know what it looked like.

What’s also great is Tia and I get to see and hear the huge parts of conversations that we might never tell each other, but [that we] tell our friends. That’s been therapeutic and made us closer. Everybody has sisters or brothers or that best friend you may have disagreements with so many people can relate to and have been loving it.