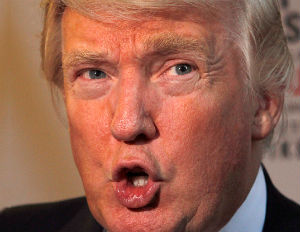 While everyone was left in awe by BeyoncÃ©’s Super Bowl performance Donald Trump was not impressed.

The mogul went on the Howard Stern Show and let the world know how he felt about the megastar’s performance. He felt Queen Bey’s dancing was too “suggestive.”

“When BeyoncÃ© was thrusting her hips forward in a very suggestive manner, if someone else would have done that it would have been a national scandal,â€ said the birther. â€I thought it was ridiculous … I thought it was not appropriate.â€

Even though he made it clear he was not happy with BeyoncÃ©’s half-time show, he admitted that she “gets a pass.â€