Does the Anti-Common Core Movement Have a Race Problem? 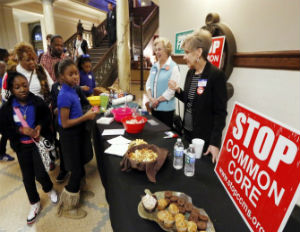 Written by Emmanuel Felton, a staff writer at The Hechinger Report, where this article was originally posted. For more on Felton, see below.

While protests against the Common Core have sprung up in communities as diverse as New York City; St. Tammany Parish, Louisiana; and Portland, Oregon, a new poll suggests that the protestors themselves may be less diverse: White parents tend to dislike the standards, while the majority of black and Hispanic parents approve of Common Core.

The NBC News State of Parenting Poll, which was sponsored by Pearson, a publisher of Common Core textbooks and tests, found that 50% of parents surveyed approved of the Common Core and 38% opposed the standards, which are grade-level expectations in math and English in place in more than 40 states. But the plurality of white parents — 49% — opposed the standards, while 73% of Hispanic parents and 56% of black parents favored the Common Core.

Rick Hess, resident scholar and director of education policy studies at the conservative-leaning American Enterprise Institute, thinks some of this can be explained by partisan politics.

“It has become highly politicized. It’s anathema on the right and we know that Tea Party conservatives are disproportionally white and we know that the Democratic coalition is heavily black and Hispanic,â€ said Hess. “So if responders are answering with an eye to their political radar and whom they tend to trust that might lead to big gaps like these.â€

The poll did indeed find big differences among Republicans and Democrats. While 61% of Democrats and 57% of independents supported the standards, only 26% of Republicans did.
“As long as black and brown people are receiving a substandard education, they are going to want the next, better thing,” said Andre Perry, dean of urban education at Davenport University.

Hess says this interpretation, however, doesn’t fully explain the big racial differences.”If it was purely partisan, you would expect blacks to be more supportive than Latinos,â€ added Hess. “And a lot of these white families are liberals that feel Common Core is too focused on reading and math and is pushing things like art and music out.â€

“Whether you are a recent immigrant or a sixth-generation American, education is important,â€ said de la Vara. “Very few things are monolithic about our community but education is one of them.â€