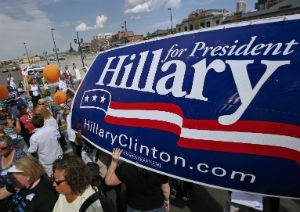 All eyes are on Philadelphia and the Democratic National Convention, as many Democrats rally around Hillary Clinton, the first female presidential nominee of a major party.

This comes days after Donald TrumpÂ clinched the nomination of his Republican Party at the GOP National Convention in Cleveland, Ohio.

A study by WalletHub.com finds rare common ground between tenant Trump supporters. About a quarter of them have bad credit scores. The survey found that:

“The higher a consumer’s credit score, typically the higher their income level. High credit scores also skew to an older demographic, since length of open credit lines plays a major role in the overall score,â€ says Jill Gonzalez, an analyst at WalletHub.

FICO (Fair Issac and Company) is the company that actually takes the information in your credit history and puts it into a mathematical formula in order to calculate your credit score.

Lenders use that score to determine if you’re a good credit risk, if they’ll give you a loan, and how much they’ll charge you. FICO scores have a 300-850 range, and it’s estimated that 90% of all of the lenders in the U.S. use FICO scores.

Make time to make sure that you are doing all that you can to take charge of this important part of your financial life. You can start by getting a free copy of your credit report at www.AnnualCreditReport.com.

In addition to credit score, economic circumstance also plays a role in voter participation, according to data from the Census Bureau. People with household incomes of more than $75,000 voted at the highest rate of 77% in the 2012 presidential election.

If you are among the Clinton and Trump supporters who struggle with bad credit, you may want to consider free credit counseling from the National Foundation for Credit Counseling. They can help you create strategies to reduce unsecured debt.

Why Some College Grads End Up in Low Paying Careers