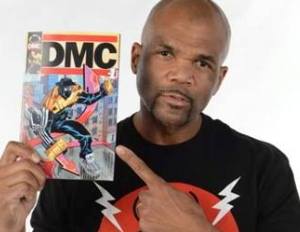 According to the New York Daily News, hip-hop legend DMC of Run-DMC fame is now a superhero via his own comic. Darryl Makes Comics is debuting its first novel, “DMC,â€ – set in an alternative ’80s universe of the Big Apple.

Since comics were a passion of his before hip-hop, DMC, aka Darryl McDaniels, Â will debut his comic at Comic Con in New York City. His comic alter ego rocks his signature Adidas, fedora, and rope chain, only with a face mask that looks tougher than leather.

“I was a shy kid, so when DJ Run was first putting me on these records, I went back to my comic books for confidence,â€ McDaniels told the Daily News. “I would hear a beat and go, ‘OK, what would the Hulk do to this?’ It was all imagination to me. That’s why, if you hear my delivery,â€ he added, breaking into one of his signature rhymes, “‘Crash through walls/Come through floors/Bust through ceilings’ – all the dominant punching lines came from Â [channeling] the Hulk.â€