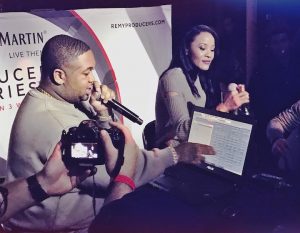 Technology has flipped the music industry on it’s back, especially when a producer can recreate a hit record on the spot in front of his admiring fans.Â

This past weekend in San Francisco, DJ Mustard joined a group of four producing hopefuls, who showcased their best beats in an effort to win a spot in the Los Angeles season finale of RÃ©my Martin’s Producers Series, a competition sponsored by E. RÃ©my Martin & Co. in search of the hottest, new, up-and-coming music producer.

AfterÂ the finalists were selected, DJ Mustard, the producer behind Rihanna’s, “Needed Me,” sat with Shay Diddy of 106 KMEL to show just how easy it was to produce a record without the bells and whistles, which the traditional studio environment provides. He started with a simple bassline, added cow bells, and then 808s–all from the power of his laptop.

“Once you get the 808, the subs, and all that together, you add another 808 under the baseline, which makes the base a little deeper,â€ says Mustard. When all was said and done, we are left with a musical entrÃ©e equivalent to that of a meal from aÂ five-star restaurant.

So, if producers can make hits from their bedrooms, and artists no longer have to go anywhere to lay down tracks, what does that mean for the industry?Â Black Enterprise spoke to seasoned producer, Rook Ortiz, of the producing trio, J.U.S.T.I.C.E League, who quoted his father, legendary musician, Gumbi Ortiz, “It ain’t the arrow–it’s the Indian.â€Â

Ortiz believes that a major benefit of being able to produce and create via a laptop is that it is designed to be mobile. Also, saving money on studio sessions isn’t a bad consequence, either. He mentions tools, like Logic and Universal Audio, that are able to come very close to the “produced studio sound.”Â When Ortiz is remote, the three team members that make up J.U.S.T.I.C.E League can be in different areas of the country, but still collaborate very seamlessly, using transfer tools like Dropbox. “If I am in New York City, and Coli and Kenny are in Atlanta, we can still collaborate as if we are all in the same room,â€ Otriz says.

J.U.S.T.I.C.E. League’s biggest work to date, Rick Ross’ Maybach MusicÂ series, specifically “Maybach Music III” and “Maybach Music IV,” were both recorded to their laptops instead of tape, as they played live instruments. “The best quality of work comes when you can do a hybrid of both live and in-studio sessions,â€ says Ortiz.

Even though there is a sense of simplicity, there is still a part of DJ Mustard that believes that records should be recorded in studios. In a past interview with Steve Lobel, he stated that he appreciates the vibe, and he thinks you get a better sound. However, he doubts that the normal consumer even notices the difference.