Disney Celebrate the Tales and Tastes of Africa at Harambe Nights 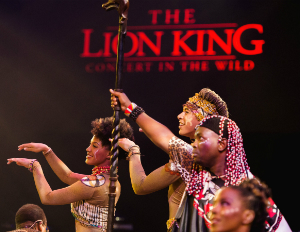 The Lion King: Concert in the Wild (Image: Disney)

This summer Walt Disney World resort is rolling out a celebration unlike any other to mark the 20th anniversary of The Lion King.

The main event is a 55-minute theatrical production of The Lion King: Concert in the Wild, a multimedia retelling of Simba’s beloved coming of age story.

“The initial idea was to take a story that has been told so well as a film and on stages around the country, in fact around the world,â€ says Marsha Jackson-Randolph, the show’s director. “How do you begin to have a fresh look at it? And the answer was to look within our own circle of Harambe Village, our fictional African village, and to allow them to tell the story and to own it and to give voice to it. And that has come to fruition in such a wonderful, wonderful way.â€

Each week features a different celebrity narrator backed by a live orchestra and a company of singers and dancers. The premiere concert on June 7th featured Tony award-winner Viola Davis. The lineup of remaining narrators is:

The show is followed by an all-inclusive street party in Harambe Village, complete with an Afropop band, street performers, and African-inspired cuisine such as spicy Durban chicken, Moroccan beef kefta, and kachumbari salad.

Harambe Nights runs every Saturday through August 9th from 7:00 p.m. to 10:30 p.m. at Disney’s Animal Kingdom. General admission tickets are $119 for ages 10 and up; $79 ages 9 and under. Parking is complimentary. Tickets can be purchased at Disneyworld.com/HarambeNights.