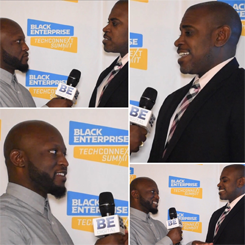 This year at TechConneXt, I was not only blessed to be asked to be a committee member and industry mentor of the BE Smart Hackathon, but I was able to finally get the chance to work with my #techie buddiesÂ from Intel, Michael Greene, vice president, software and service group and general manager, system technologies and optimization, and Damola ‘D’ Omotosho, software systems automation engineer customer Q&R.

We had a chance to talk about artificial intelligence (AI), virtual reality (VR), augmented reality (AR), and so much more! Â Truly, it was a great time; we collectively had “geeking-out” on new things on the horizon. I was also able to get a few things on the record for you to learn more about Intel, as they are not just in the business of developing and distributing processors for devices, they are so much more.

One of key points–which was my “ah ha” moment–was when Michael shared that one of the primary goals at Intel is to increase the data transfer bandwidth of an end-user, to compute through software from a mobile device to the cloud at an even faster rate than current speeds today.

Check the video and how Michael Greene and I both agree on “no dumb autonomousÂ cars” for us.

I know during the video, Michael and I used an abundance of #techie acronyms and industry slang. Â Below are a few of the of terms 🙂

Next up, Renee Forney, deputy CIO for cybersecurity at U.S. Department of Energy.

4 Signs That You’re Headed Down the Wrong Career Path