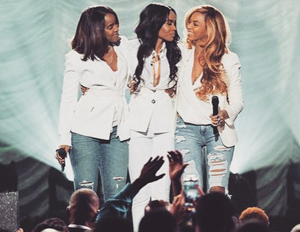 [Related: The Perfect Pair: Beyonce and Giuseppi Zanotti Team Up for Shoe Collab]

Every year, the event showcases arguably entertainment’s cream of the crop talent and artists across multiple genres take to the Stellar stage and belt out gospel classics and hits. This year, reuniting with their gospel roots was Kelly Rowland and Beyonce. The two Destiny’s Child members accompanied their band mate Michelle Williams to perform her spirited number “Say Yes” off of her latest album, Journey to Freedom.

Williams, who’s released several gospel albums since the group separation, took to Instagram to share a warming pic of the three, along with a touching caption.

The presence of the Lord was definitely at the Stellar Awards last night! I was so happy to have my sisters @kellyrowland and @beyonce join me on stage to perform "Say Yes" for an amazing crowd. I really hope that this performance touches and heals someone. Nothing like old times! The Stellar Awards air next Sunday on TVOne! SayYes #DC3

The night was an extra special one for the “Say Yes” singer, as the smash single also snagged her the Music Video of the Year award—her first Stellar win. The video, which featured Williams and her Destiny’s Child sisters, was equally popular across both secular and faith-based platforms.

Thank you to each and every one of you that voted for #SayYes and a very special THANK YOU to @matthewacherry for directing this incredible video. And of course to my ladies to @beyonce and @kellyrowland for blessing the song. #StellarAwards

The awards will air April 5 on TV One.

Catch a peek of the performance below.