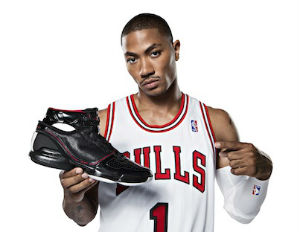 It turns out I can count on one hand the amount of times I’ve felt bad for a professional athlete since I stopped feeling bad for professional athletes. One wasn’t even a pro: Lindsay Harding ended her career at Duke with two missed free throws that would have put her team ahead by one with a tenth of a second left on the clock. She broke down on the court. I routinely empathize when a player performs soon after personal loss, such as the Baltimore Ravens wide receiver Torrey Smith, following the loss of his brother earlier this season.

The other one was Derrick Rose this past September.

Rose tore his ACL in Game 1 of the first round of the playoffs against the Philadelphia 76ers in late April. Looking at him weep on the dais during a media event to promote his new shoe last September, you got the feeling that Rose had never been through anything this excruciating, this emotionally draining.

“It’s truly a blessing, man,â€ said Rose, when asked what the support from the city of Chicago and his fans meant to him. “With all the stuff that’s going on in this city, a kid from Englewood, whose got something positive going on, that makes me feel so good. This shoe is great, all this is great, but I can’t explain this … I can’t. I went through so much, and to have true fans that means a lot to me and I know it means a lot to my family because we weren’t supposed to be here. But God made a way.â€

All Rose had ever done before his injury was defer praise to his teammates, coaches and fans, all while improving his game to become one of the league’s premier players. He was named, at 22, the MVP after the 2010-2011 regular season. The youngest player to ever win the award, Rose’s eyes welled as he talked directly to his mother at the press conference announcing he’d won.

“Brenda Rose, my heart, the reason why I play the way I play,” said Rose. “Just knowing that days that I don’t feel like going to practice, when I’m having a hard time, I think about her when she had to wake me up, go to work, and just making sure that I’m alright and making sure the family is alright. Those are hard days. My days shouldn’t be hard because I love doing what I’m doing and that’s playing basketball. So you keep me going every day and I love you and I appreciate you better than my life.â€

And what about when he signed his contract extension? More humility. More praise. More deflection.

“I never would have thought in a million years I’d sign a contract like this,” Rose said at the press conference in which he signed a five-year, $95 million extension. “No one from Englewood’s ever been in my position, so sometimes I think, why me?

He had a few words for his mother, again.

“I think I can finally say this now: Mom, we finally made it.”

All of this means that there are more than enough reasons to root for Derrick Rose, through injury and strife, through setbacks and comebacks. The Adidas campaign (anchored by a spot that shows the city of Chicago coming to a halt when he’s injured, then springing back to life upon his rehabilitation) is nothing if not an obvious one. But it’s the content of the character of their star which Adidas can be most proud of. He doesn’t need to be defined by his brand. Rose’s brand — the work ethic, the humility, his values — already did the hard work.

Rose recently became a dad, tweeting out pictures of his son earlier this week.

They say it changes you, but really, is anyone waiting for any improvement from Derrick Rose?