Republicans Seek to Maintain Control of US Senate 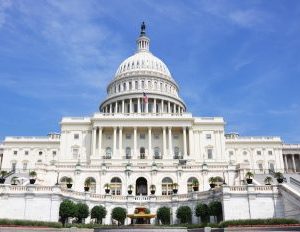 Republicans Take Control of the House

The battle for the oval office is not the only contested office in this year’s election. There are 34 U.S. Senate races that will determine whether Democrats or Republicans control the Senate. Polls are tight and too close for comfort for Republicans, as they seek to keep control of the Senate.

Let’s look at the current Senate and likely scenarios that could happen on Election Day.

The U.S. Senate branch of government has a total of 100 senators with 51 seats being the majority. Each state has two senate seats regardless of the population of its electorate. Currently, Republicans control the Senate with (54) seats, and the Democrats have (46) seats, which includes two Independent senators that have left-leaning views.

Not all 100 Senate seats are up for re-election this year. Only 34 seats will be on the ballot this November–10 Democratic seats and 24 Republican seats. The election results for these down ballot contests will determine who controls the Senate.

But are the 34 Senate races competitive enough to change the status quo?

Based on the trends in recent polls, 17 seats have an 85% chance of being under Republican control, while 10 seats have a 95% chance for Democrats control. That leaves seven seats up for grabs that will determine who will enter 2017 with the legislative power of the senate. The illustration below highlights sevenÂ competitive states, the senatorial incumbent’s political affiliation, and the chance of winning for each party. Overall, the Democrats have a 57% chance of winning the Senate and Republicans have a 43% chance of retaining power.

What happens if there is a tie?

In the event of a tie where 50 seats are held by each party, the incoming [new] vice president (VP) will have the deciding vote to determine control of the Senate given that the VP is head of the Senate.

If Hillary Clinton-Tim Kaine wins, the minimum goal of the Democratic Party is to win at least four additional seats bringing the party to a minimum target of 50 Senate seats, since VP Kaine would be the tie-breaking vote.

If Hillary Clinton-Tim Kaine loses, the goal of Democrats is to win at least five additional seats bringing the party to a minimum of 51 Senate seats, leaving the Republicans with only 49 seats making it virtually impossible for the GOP to have complete control of Congress.

If Donald Trump-Mike Pence wins, the maximum allowance for the loss of Senate seats is four, leaving the party with 50 seats. VP Pence would be the tiebreaker, affording the Republicans the opportunity to maintain control of the legislative branch.

If Donald Trump-Mike Pence loses, the maximum allowance for the loss of Senate seats is three, which would leave the GOP with 51 seats and majority control of the Senate.

If the GOP lose the Senate, it’s likely that Sen. Bernie Sanders and Sen. Elizabeth Warren will have leadership roles of critical Senate Committees, such as Banking, Budget, and Finance. All of whichÂ will be vital to whether America adequately reduces the national debt, returns to 3.5% GDP growth, and creates well-paying private sector jobs.

But there is good news if the GOP loses control of the Senate–sort of. During midterm elections in 2018, 23 Senate seats under Democrat control will be contested by Republicans in highly favorable red states in a nonpresidential year.

The Balance of Power:

Based on current polls, the House will likely remain under Republican control, while the power of the oval office and Senate will be determined on Nov. 8. Ideally, it is in America’s best interest if there is a political balance of power between the White House, the House of Representatives, and U.S. Senate.

Otherwise, complete control by either party will certainly push a unilateral agenda, which could include the composition of the Supreme Court, fiscal policy, taxation, job growth, and foreign policies. To view the senatorial candidates in the 34 competitive races, click here.

The country cannot afford to have Washington gridlock in the next administration because the electorate will pay the price. But one thing is for sure: we will be able to forecast the political agenda of the next four years shortly after all the polls close on Election Day.

This article was written byÂ John Burnett, anÂ Urban Financial Freedom Fighter. John has over 20 years of executive experience at some of the world’s top banks and business information companies. He is an adjunct professor at Hampton University and Metropolitan College of New York. John is a strategic adviser toÂ New York Republican State Committee.

Democrats Seek Control of US House of Representatives

‘Queen of Katwe’ Is a Must-See