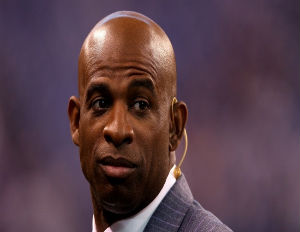 In a recent radio interview withÂ KRLD-FM 105.3, NFL Hall of Famer Deion Sanders responded to allegations from an unnamed white reporter that his state-funded charter school, Prime Prep Academy, illegally recruited football and basketball players. He emphasized thatÂ he has nothing to gain from the athletic success of his school.

“First of all,” Sanders said, “This was all started mainly by a Caucasian reporter from a news station, Channel 8, you know who I’m talking about, and he seems like he’s the African-American killer…It’s always something against a brother. And that bothers me. I’ve never been accused of cheating with anything, in any sports, in any arena, in my life…Now to be accused of something as stupid and as simplistic as this and all I have is 30 kids out there.â€

Sanders’ school is in Ft. Worth and Oak Cliff Texas.

Sanders said he thinks he’s being targeted because he “provokes change” and is giving kids in low-income areas a chance to stay in school.

“I’m trying to get kids to college,” he added. “The majority of my kids don’t even play sports.â€