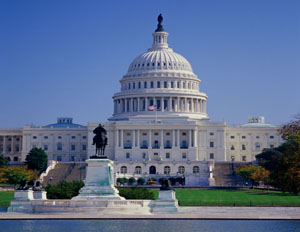 Although President Barack Obama made it a priority to enter negotiations on the nation’s debt limit today, the clock continues to tick for Capitol Hill lawmakers on negotiations to beef up the limit. Republicans are adamant in their position that they will not agree to raising the limit without a commensurate level of cuts in the federal budget. Democrats are equally determined that revenue increases and economic stimulus measures must be part of any deal. Failure to come to an agreement by the Treasury Department’s August 2 deadline, could throw financial markets into turmoil and jeopardize the nation’s already weak economic recovery.

House Majority Leader Eric Cantor (R-Virginia) chose to walk away from the group led by Vice President Joe Biden that is working on the deal, eliciting criticism from Democrats and surprise from Republicans who were caught unaware that he was even considering such a move. Sen. Jon Kyl, Cantor’s counterpart in the upper chamber, also has chosen to no longer participate in the process.

Cantor said that he walked away from the negotiations because the group has reached an impasse over taxes that he believes has to be resolved between Boehner and President Obama.

“These talks are essentially in abeyance for now. They may or may not resume in different forms,â€ White House spokesman Jay Carney told reporters last week.

“There is an urgent need to resolve the debt ceiling issue and it is beyond irresponsible not to work toward increasing the debt limit immediately,â€ he said. “I am very disappointed that the Republican leadership has decided to walk away from such critical negotiations with the future of our economic viability in an indeterminate state. The American people do not deserve this.â€

So now the ball is in Obama and Boehner’s court. The two and Senate Majority Leader Harry Reid (D-Nevada) are expected to take place at the White House this week.

Speaking on ABC’s This Week With Christiane Amanpour Sunday morning, House Assistant Minority Leader James Clyburn (D-South Carolina) said that he thought the bipartisan talks had been going well until the Republican leaders opted out. He also disputed Republican “talking pointsâ€ that Democrats want to increase taxes, saying that they want to close the loopholes that enable corporations and the wealthiest Americans to pay lower taxes than they should.

“We want to close those loopholes up. We do not want to raise anybody’s tax rates. That’s never been on the table, and I wish they would get beyond their talking points and really get honest with the American people as to what these discussions are about,â€ Clyburn said.