Thinking About Cultural Cues And How to Avoid Business Mishaps 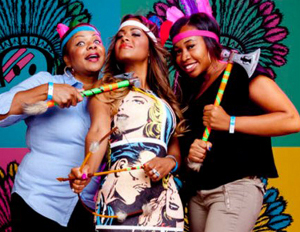 In stores across the US and abroad, many brands are incorporating “Native American inspiredâ€ aesthetics in their clothing, accessories, and other lines. Feathered headdresses, tribal print patterns, and items labeled ‘Navajo’ or ‘Aztec’ have all found their way into recent clothing collections by major companies.

So what’s so wrong with “borrowingâ€ from other cultures in fashion and design? The problem lies with seeing these issues as benign or sharing, when they’re often “cultural appropriation,â€ which is defined as “taking intellectual property, traditional knowledge, cultural expressions, or artiÂ­facts from someone else’s culture without permission.â€

The Licensing Industry Merchandisers’ Association (LIMA) recently hosted a webinar entitled:Â  Thinking About Cultural Cues — And How to Avoid Mishaps. Elie Dekel, President of Saban Brands, Jessica Metcalfe, blogger of Beyond Buckskin and Adrienne Keene, blogger of Native Appropriations discussed how the Paul Frank brand went through a learning process regarding cultural appropriation with the Native American community.

While some would say it’s better to just avoid any representation of other cultures in advertising or branding, this is often not possible. The webinar did discuss a couple of ways that companies can ethically participate in displays of other cultures.

Be proactive in properly engaging the culture you’re borrowing from

CompaÂ­nies can do this by directly reaching out to communities and community leaders through their ofÂ­ficial representatives. For example, Nike collaborated with Native American artist Bunky Echo Hawk for its N7 collection.

Paul Frank inadvertently named an alcoholic beverage after an important Native American dance ceremony. With due diligence and research from trusted sources either close to or in the community, brands can avoid making a similar mistake.

Understand that most if not all Indigenous communities have experienced histories of harmful exploitation.

For generations, Native peoples and other groups have not had the power to control the ways they are represented. Taking images and cultural artifacts that have deep meaning in their communities and using them for mateÂ­rial and commercial gain takes away their power and importance. Brands should ask the community or group if they wish to share this aspect of their culture and how they want it shared.

“We live in a beautiful world where we can be inspired by the cultural practices of other people and share our own cultures with others. Inspiration, however, implies creativity and requires some degree of originalityâ€ says Keene.

Brands should avoid profiting off of a knock-off or a recycled steÂ­reotype of an aspect of another culture.

While the “Dream Catchin’ with Paul Frankâ€ began as an event rooted in harmful stereotypes, the actions taken by the comÂ­pany and the resulting collaboration have laid a positive path for other corporations to follow.

How to Get More Flex Time at Work