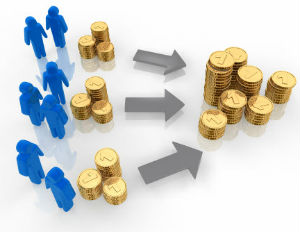 With the average cost of tuition, fees, and room and board at a private, nonprofit, four-year college topping out at more than $39,000, students and parents are looking for alternative financing to bridge the gap. Crowdfunding, which involves asking a group of people to help fund a project or need, has traditionally been used by artists looking to fund creative projects and by entrepreneurs seeking to raise startup capital. But students are using this method to help finance education. By the first quarter of 2012, there were a total of 452 crowdfunding platforms across the globe that have raised roughly $1.5 billion for various causes, according to Crowdsourcing.org, an industry website.

Satarra Troutman says she benefitted from this unusual form of college financing in the fall when she was about to begin her first year of college. The 18-year-old received an academic scholarship from Boston-based Berklee College of Music, which boasts Grammy Award-winning alumni such as Quincy Jones and Branford Marsalis. Much to Troutman’s dismay, she received a letter stating her scholarship was reduced due to budget cuts. This left the Atlantan short $20,000–and with just one month to come up with the money in time for classes in August.

“All I’ve ever wanted to do was make music. Tuition money was potentially blocking me from attending my dream school,â€ says Troutman, who plans to major in bass and vocal performance.

Troutman, a former Juilliard Jazz summer resident and Grammy Camp graduate, decided to tap into her social media network on Twitter and Facebook, creating a page on the crowdfunding website Indiegogo, where she could tell her more than 800 friends and followers about her goal and seek their contributions. By the end of the month, Troutman had raised $10,000. And just in time, $10,000 of Troutman’s scholarship was reinstated, enabling her to attend school.

While crowdfunding is a great tool, it’s important to have a savings plan in place well before you’ll need money to fund your education. Money from crowdfunding should be a means of filling any gaps, notes Joe Hurley, founder and CEO of SavingforCollege.com, an educational website focused on saving money for higher education. Families should also look into a more formal savings tool, such as a 529 savings plan.

“The earlier you save, the better,â€ says Marcos Cordero, CEO and co-founder of GradSave, an online educational crowdfunding platform.â€ The GradSave platform is the same as traditional crowdfunding, but the primary difference is we encourage long-term saving.â€

How Obama Plans To Win His Minimum Wage Campaign